Yeah, what of it? Wanna take this outside... 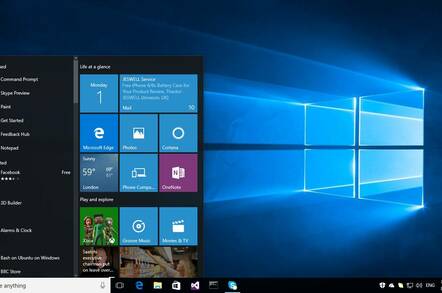 The Big Review One year after the launch of Windows 10, Microsoft has released the Anniversary Update, bringing new features as well as usability tweaks to the operating system.

Windows 10 was always more than just another release. Notable innovations include the concept of Windows-as-a-service, with regular updates (free for consumer editions); and the idea of "One Windows," with a Universal Windows Platform (UWP) for applications, along with shared code across PCs, tablets and devices.

Microsoft also sought to win back users who disliked the dual personalities in Windows 8, re-introducing a desktop Start menu and making UWP applications run in a window rather than full screen. Not everything in Windows 8 was discarded, though. The UWP is the next generation of its Windows Runtime platform, and the Windows App store remains.

Strategically, Windows 10 marks the moment when Microsoft decided it was more important to have as many users as possible on the latest version of its operating system than to generate revenue from upgrades. Profits come from apps, advertising, and integration with cloud services. CEO Satya Nadella described the strategy as to "grow new monetization through services across a unified Windows platform," when he was speaking at the company's recent earnings webcast.

Nadella added that "Bing profitability continues to grow, with greater than 40 percent of the search revenue in June from Windows 10 devices." Cortana, the personal digital assistant built into Windows 10, always uses Bing for search, and users will find it hard to avoid occasional promotional notifications, particularly in the consumer editions including Windows Pro.

What's new in the Anniversary Update

New features in Windows 10 Anniversary fall into two categories: those which immediately affect the user experience, and low-level updates of interest to developers and admins. In this case, the latter are more interesting, but nevertheless there are numerous feature updates and tweaks to the user interface. The original Windows 10 was a rushed release, and fine-tuning is welcome.

The Start menu has been tweaked, and is now a three-column affair with the All Apps list always on view. This saves a click, compared to the earlier effort, but it is unlikely to satisfy those still in love with the Windows 7 Start menu with its simple hierarchical structure and tidier appearance.

If you ask the question, "Why is the Windows 10 Start menu as it is?", the answer is a long story about Windows Phone and Live Tiles and Windows 8 and tablets, and then Cortana thrown into the mix. It is functional though; and not so important when you consider all the other ways to launch applications, such as taskbar pinning, desktop shortcuts, and Search.

Talking about Cortana, there are a few changes here as well. The first is that Cortana cannot be disabled in the normal user interface, whereas there was previously an Off option in Settings. Next, there is an option to use Cortana from the lock screen. Third, notifications can now sync across devices, so you get missed call notifications on your PC, for example.

A Windows 10 annoyance is that Cortana doubles as Windows and Start Menu Search. In Windows 7, you can type into the search box in the Start menu and be confident of finding an application if it is installed. In Windows 10, there is uncertainty about whether you find your application or setting, or search the web. From Microsoft's perspective, this is core functionality. According to this article, if you disable web search you disable Cortana, and if you have Windows 10 Pro or below, you cannot change the setting anyway.

Next page: Ink and Tablets
Page:
Tips and corrections
263 Comments