Don't want to vote for Clinton or Trump? How about this woman who says Wi-Fi melts kids' brains? 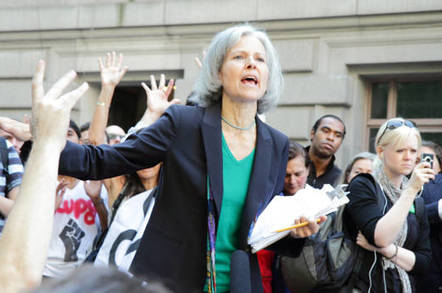 According to a recent poll, just 10 per cent of Americans are excited about voting for either of the two political parties' presidential candidates in November.

As a result, serious attention is being paid to other candidates. And in this case, that is Gary Johnson of the Libertarian Party and Jill Stein of the Green Party.

Their support in recent polls is such that they may actually get a podium at the upcoming presidential debates (you need 15 per cent support) – something that the United States hasn't seen since 1992 and Ross Perot.

But before you get too excited, it may be worth pointing out that Jill Stein thinks Wi-Fi melts kids' brains.

Just to be clear, by Wi-Fi, we mean the wireless data signals sent by routers that millions of mobile devices use every day to send and receive data, typically over the internet. Those signals, according to Stein, are affecting children's brains.

In a recording of a meeting from March this year, Stein is asked about her concerns over children being given individual computers to do school work. In large part, teachers are very excited about the possibilities that tablets and cheap laptops provide to children. But of course, every tool needs to be carefully considered.

Unless you're Jill Stein, that is, where it seems that technology poses a persistent threat to society and our own brains.

"Health issues, social issues, you name it," she says in response to a question over computers for each child. "But to be staring at screens ... we already know that kids who get put in front of TVs instead of interacting, this is not good in all kinds of ways. And it's just not good for their cognitive, it's not good for their social development, I mean, that is incredible that kids in kindergarten ... We should be moving away from screens at all levels of education, not moving into them."

According to Stein, handing children something that grants them access to an almost unimaginable amount of learning and information is a corporate conspiracy. "This is another corporate ruse," she warned. "This is another gimmick to try to make a buck. To make big bucks in fact. And education, and teachers, and communities suffer. So we need to stand up to that."

As with most wild theories, there is a kernel of truth in there, albeit one around which a fair amount of crazy has been wound. There is, for example, the serious issue of what Google, for example, is doing with all the data it is building up through the widespread use of its "free" school services.

But then things get weirder when Stein is asked "what about the wireless?" and responds: "We should not be subjecting kids' brains especially to that. And we don't follow that issue in this country, but in Europe where they do, they have good precautions around wireless – maybe not good enough, because it's very hard to study this stuff.

"We make guinea pigs out of whole populations and then we discover how many die. And this is like the paradigm for how public health works in this country and it's outrageous, you know."

To be clear, Stein is suggesting that Wi-Fi usage may lead to children dying later on in life.

Next page: Hairball of fear
Page:
Tips and corrections
123 Comments

LTE-U vs. WiFi fight gets closer to a settlement

Google declares victory for its Wifi router before it's even shipped

We won because we built it from the ground up, Google insists