The 1970s called and wants its attitudes back

Kaspersky has apologized for displaying a sexist pop-up advert in its security software. It's not sorry about showing adverts on people's PCs, however.

The Russian giant's desktop software suite flings adverts, er, news items about Kaspersky products at users who have already paid for its applications. On Friday, one of these fine articles appeared on PCs, with a cartoon that many have found offensive. 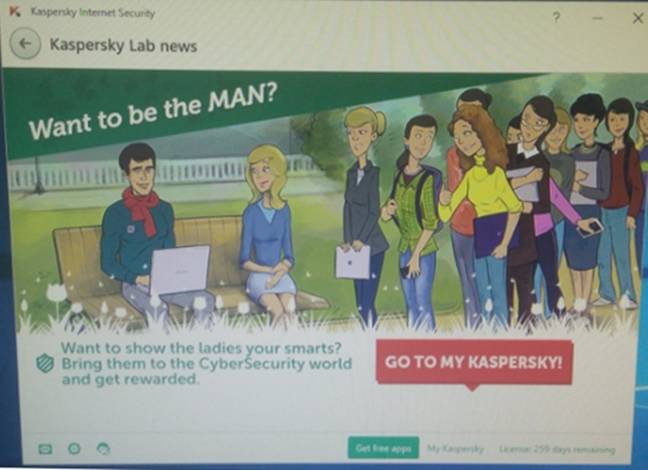 Kasp's dodgy ad ... About as subtle as a house brick (Source: Adam Hay)

"Want to be the man?" the cyber-poster asks, depicting a line of women lining up next to a bloke working on a computer. "Want to show the ladies your smarts? Bring them to the cybersecurity world and get rewarded."

The image was spread across social media on waves of outrage. Don't worry about chipping your nails, girls, get a guy to fix your PC for you, and make sure you make it worth his while, the banner is essentially saying, nudging and winking away like a reanimated Sid James.

It's a shame to see this one slip though quality control. After all, the security company began life with Natalia Kaspersky, the former wife of chief scientist Eugene Kaspersky, as CEO, and she built the company up from nothing to become one of the most prominent antivirus outfits on the planet.

Ms Kaspersky, who has since left the company, is a multimillionaire and has twice been declared the number-one IT executive in her home country by the Association of Russian Managers.

To its credit, the antivirus biz has recognized that it made a mistake and issued an apology.

"Earlier today an inappropriate image appeared in in our product. It has been removed and we deeply regret this mistake and sincerely apologize for the offence we caused with this image," a statement reads.

Incidentally, if you want to turn off the ads built into the antivirus suite, go to Settings > Additional > Notifications > Turn off the option about Kaspersky news. ®