Give .gay to the gays, roars exiting ombudsman 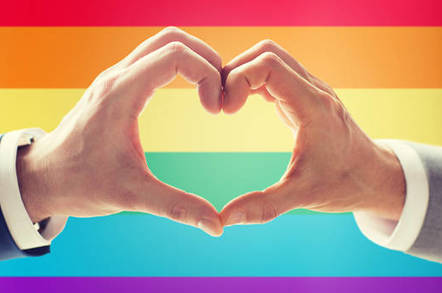 The independent ombudsman at DNS overseer ICANN has used his last day on the job to fire a broadside over the ".gay" top-level domain.

In a ruling published on his own website, Chris LaHatte argues that the organization's board should reject a recommendation by its own governance committee (BGC) and should grant special community status to one of the four applicants for .gay, effectively handing it control of the registry.

LaHatte argues that a recent acceptance by ICANN that it should incorporate human rights principles into its functioning means that it should negate the circular logic that has led the organization to repeatedly reject Dot Gay LLC's bid.

"I recommend that the board looks at the bigger picture beyond the BGC recommendation," LaHatte wrote, pointing out that the ICANN board is not obliged to follow its governance committee's recommendations. "The board should grant the community application status to the applicant and put an end to this long and difficult issue."

The issue has indeed been long and difficult. It has been nearly five years since Dot Gay LLC – which is endorsed by an enormous number of gay organizations across the globe – applied for the internet extension. It was seen by many as a shoo-in for the special "community" status that was created to enable groups of people to gain control of their relevant online space without having to go up against large corporations.

In .gay's case, the three other bidders are commercial organizations that have applied for, and also run, dozens of other top-level domains.

There was some surprise then when back in 2014, Dot Gay's bid was rejected by the Economist Intelligence Unit (EIU) – which has been hired by ICANN to review community applications – for not being gay enough.

There was no "nexus between proposed string and community," the EIU argued. "The group of self-identified gay individuals globally is estimated to be 1.2 per cent of the world population (more than 70 million), while the application states that the size of the community it has defined ... is 7 million. This difference is substantial and is indicative of the degree to which the applied-for string substantially over-reaches beyond the community."

What made the decision all the more peculiar was that the EIU approved community applications for a number of other names that were clearly commercial entities – and so appeared to be undermining the entire idea behind the community status. Among those approved were .radio, .hotel and .Osaka.

In response, Dot Gay appealed to ICANN's "reconsideration committee" – which, despite its name, doesn't actually reconsider decisions but simply checks whether the procedures have been followed – and used the fact that no fewer than 54 letters of support for its application had not been properly evaluated. ICANN agreed and ordered a re-evaluation.

That re-evaluation came back an extraordinary nine months later and again denied the application, this time because the exact same application was too gay.

Amazingly, the EIU – which rarely if ever deals with anything other than economic data – decided that the word "gay" could only be used to apply to homosexual men and women, but noted that the Dot Gay application defined "gay" as covering men, women, transgender and intersex individuals. As such, it argued, the application was overly broad.

That absurd judgment led the Dot Gay team to appeal again – it is now October of 2015 – claiming that there was a "clear bias" against the application and that it has been treated "unfairly."

That appeal was rejected by ICANN in February with the BGC's chair going to the unusual length of publishing a blog post about the decision in an effort to persuade people that the organization was not homophobic. He insisted the BGC could only decide on matters of process and since the process had been followed, it could not accept the appeal – regardless of whether the decision made sense or not.

Still unable to believe what was happening, Dot Gay appealed a third time, trying to get past the BGC's insistence that it could only consider procedural inconsistencies by pointing to the fact that the EIU has used one of its staff to carry out the second review rather than one of its officially named evaluators.

ICANN again rejected the appeal last month – five months after it had been filed – and posted an update to its earlier blog post, again arguing that the rejection was "not a statement about the validity of dotgay LLC's application or dotgay LLC's supporters."

In that decision [PDF], ICANN's governance committee said Dot Gay had "not stated proper grounds for reconsideration" but noted that it was "free to ask the Ombudsman to review this matter."

That suggestion to appeal to the Ombudsman was seen as particularly galling for two reasons. First, literally the day after the decision was published, the Ombudsman was informed his services were no longer needed. And second, ICANN had been fiercely criticized during the course of a review into its accountability mechanisms for limiting the Ombudsman role and remit to the extent that the job is more for display than actual review. ICANN has promised to re-evaluate the Ombudsman's powers some time in future.

That same review of ICANN's failings and shortcomings led to the organization being forced to accept that it needed to include respect for human rights into its charter, and it was that inclusion which led LaHatte to argue that ICANN now had a good reason to pull itself out of its insistence that it was unable to do anything about the .gay application, and finally award it to Dot Gay.

Quite how much LaHatte's unceremonious exit had to do with what some say is a belated decision to stand up to the ICANN board is hard to say. But it is noteworthy that although LaHatte filed his recommendation on his last day in the role, it has not appeared on the official ICANN Ombudsman website.

LaHatte takes up about half of his judgment making the case for why the Dot Gay case falls within his jurisdiction (the most persistent complaint about his office being that the vast majority of complaints are rejected for falling outside a very narrow remit).

But, he argues, "I am very concerned about the apparent inevitability that the applicant will not be able to progress as the community applicant for this string, which would otherwise result in the other applicants being able to pay the highest price at an auction, which is almost certainly beyond the reach of the applicant, which is a community-based organization with limited resources."

No one is holding out much hope that ICANN will do the right thing and grant Dot Gay community status, however. Why? Because far more than being worried about doing and being seen to do the right thing, ICANN is worried about being sued by the other applicants, all of whom can see significant commercial value in the .gay name. ®