Cyberpunks might not be crooks but they're really very rude

El Eg – whoever they are – really upset this one 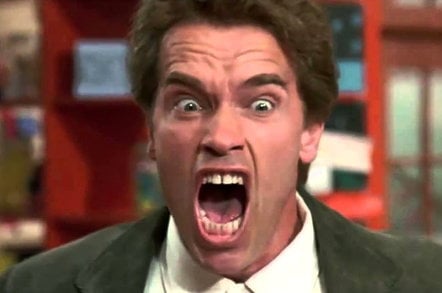 FotW An innocuous El Reg story about Russian web miscreants provoked an entirely unexpected reaction when an offended cyberpunk took it upon himself to tell us how the headline hurt his feelings.

It's since been changed to "Cyber criminals using one-stop DIY web biz shops", mostly because we're cowering in terror* after receiving the missive below from an irate cyberpunk:

DO NOT ASSOCIATE CYBERPUNKS WITH CRIME EL EG

We're not quite sure who this El Eg is - perhaps they've got a black vulture as their mascot? - but clearly they've really pissed off our anonymous cyberpunk pal.

Please, o foul-mouthed one, spare us any more of your withering invective. We promise we won't call cyberpunks crooks again until at least the end of the week. Maybe even the end of the month, if you push us. ®

* We actually laughed like hyenas and immediately resolved to continue biting the hand that feeds.

** We're not the white supremacist gaylords of Chicago fame, considered a violent bigoted outfit, as opposed to some of the more sedate street gangs. We can make you a bacon sandwich, but we're hardly as handy in the kitchen as the Gaylord restaurant chain, which, like the Reg, has various incarnations in London, San Francisco and Australia (coincidence?). Maybe you thought we were related to WWII fighter plane builder firm president Harvey Gaylord? We're not. As for the reference to Danish-English royal Cnut, we're equally honoured at the comparison. As Cnut would have said: "Er du sur man?"

FoTW: “I will attack you in cyberspace”

Google learns to smile, because AI's bad at it

Flame of The Week It's the public dole for us