Fork YOU! Sure, take the code. Then what?

Why people matter in open source 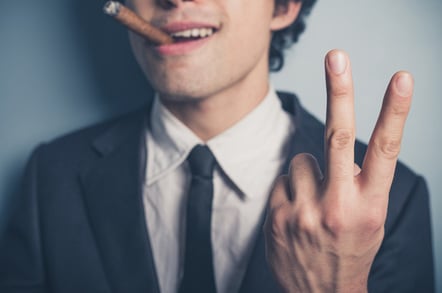 Open source insider There's an old adage in the open source world – if you don't like it, fork it. This advice, often given in a flippant manner, makes it seem like forking a piece of software is not a big deal.

Indeed, forking a small project you find on GitHub is not a big deal. There's even a handy button to make it easy to fork it. Unlike many things in programming though, that interaction model, that simplicity of forking, does not scale. There is no button next to Debian that says Fork it!

Thinking that all you need to do to make a project yours is to fork it is a fundamental misunderstanding of what large free/open source projects are – at their hearts, they are communities. One does not simply walk into Debian and fork it.

One can, on the other hand, walk out of a project, bring all the other core developers along, and essentially leave the original an empty husk.

Nextcloud consists of the core developers who built ownCloud, but who were not, and, judging by the very public way this happened, had not been, in control of the direction of the product for some time.

That Nextcloud hit the ground running, with a new company structure, completely revamped licensing structure, working website and a release within two weeks of the split hints that this was not a quick decision, but one that had been a long time coming. The steady stream of contributions and community work that has happened since shows just how eager the ownCloud community was for change.

The rift started early this year, when ownCloud cofounder Frank Karlitschek left the project with a vague, but ominous, post questioning the direction of ownCloud: "Without sharing too much, there are some moral questions popping up for me. Who owns the community? Who owns ownCloud itself? And what matters more, short-term money or long-term responsibility and growth? Is ownCloud just another company or do we also have to answer to the hundreds of volunteers who contribute and make it what it is today?"

He also gave a hint of what was to come, writing: "There is tremendous potential in ownCloud and it is an open source product protected by the AGPL license." Fast forward a couple of months and almost all of the core developers also abandoned the project – and Nextcloud was born.

There are quite a few key differences between the ownCloud project, ownCloud Inc, and Nextcloud and Nextcloud Inc. The important ones for FOSS developers and users is that Nextcloud has removed ownCloud's contributor license agreement, there's no more dual-licensing, and the trademark is now held by an independent foundation. More reassuring for both developers and users is that internal development planning will no longer happen behind closed doors. Everything at Nextcloud will happen in the open.

The impact on ownCloud Inc in the US was immediate. The company shut its doors in the US shortly after Nextcloud announced what it was up to. The company in Germany continues. The US firm also published a bitter letter trying to blame Karlitschek and the others who'd left for the demise of the US operation. Open source sausage making at its finest. It also served as a strong hint at just how bad things were inside ownCloud.

It probably doesn't help that Nextcloud has already released a drop-in replacement for ownCloud, plans to honor ownCloud's enterprise customer contracts for any company that wants to make the switch the Nextcloud. Nextcloud even claims to be working on bringing the laid-off ownCloud employees over to Nextcloud (assuming they want to go, of course).

In short, Nextcloud solved most of ownCloud's problems in the time it took ownCloud to write a bitter blog post, which should go a long way to showing why the Nextcloud fork will likely end up the successful fork in the long run – community support.

Nextcloud is just a few weeks old, but it's already got big plans. The first release is more or less just ownCloud in slightly new clothes, but don't expect that to last. If you'd like to check it out you can grab the first release of Nextcloud from the Nextcloud site.

The take-away? Once again we've seen how FOSS is more than just software – it's a way for people to write software, and when the people and philosophy behind the project fall out of step with their community, the project dies. Or gets forked. ®