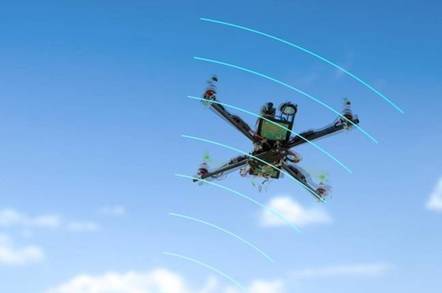 Vid A new joint venture between aircraft manufacturer Airbus and California startup Dedrone is selling a security system that can spot drones miles away and knock them out of the sky.

The system uses a network of cameras, radars, microphones, and directional scanners developed by Dedrone that can detect and target a standard commercial drone from seven miles (10 kilometers) away. Airbus' contribution is a specially developed jammer that disrupts the drone's communications.

"We offer an effective solution for this new threat that secures lower airspace once again. Airbus' and our systems complement each other perfectly, and combine early detection of drones in near and far fields, with the ability to initiate effective countermeasures automatically."

As the popularity of drones has grown, so too have complaints that they are intrusive and, in some cases, dangerous. Some have taken the often illegal route of blowing them out of the sky with shotguns, while commercial companies have developed targeted jammers, and some are even looking at feathered friends to do the job.

In this case, the jamming system uses only the frequency used by commercial drones for communication, leaving other spectrums untouched. What happens to the drone then depends on what its emergency routine is – safe landing or return to the operator.

"All over the world, incidents with universally available small drones have revealed a security gap with regards to major events or critical installations such as airports," said Thomas Müller, managing director of Airbus DS Electronics and Border Security (EBS).

"By pooling the capabilities of Airbus, with our long-range radar and jamming functions, and those of Dedrone, with their market-leading multi-sensor platform, we have a wide deployment range covering both urban and rural areas."

No pricing has been given for the system, but you can bet it won't be cheap enough for the average buyer. So, if you are concerned (and you're in the US), start investing in firearms. ®

Space Surveillance Telescope can spot specks of shiny 36,000km away