The very latest on the DNC email conspiracy. Which conspiracy? All of them, of course! 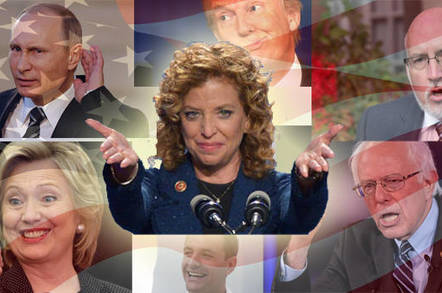 It was devastating. Absolutely devastating. It's hard to imagine anyone surviving such a shocking revelation. But they probably will of course. Thanks to their connections, if you know what I mean.

What are we talking about? Take your pick because election season is upon us and everyone, absolutely everyone is up to no good and we must shout and yell and tweet and get outrageously angry at whoever is responsible for all of this.

That Russian monster is personally responsible for the leaks of the emails from the Democratic National Committee's (DNC's) account. Is he actually "Guccifer 2.0" – the hacker that did it? Probably not. No wait, yes, he probably is.

The Russians. Trying to undermine the Greatest Democracy the World Has Ever Known by, umm, publishing people's own emails. And why did he do it – aside from being the embodiment of pure evil? Because he loves Trump! And Trump loves him!

Is Trump a secret Russian mole? No, that's too far. But hang on, maybe yes. We all hate Trump, everyone hates Trump, even the people that will vote for him as president, they hate him. And that could be the majority of the United States' population. That's a lot of hate.

And now Trump's doing a deal with Russia. First Trump says he won't uphold Article 5 of the NATO treaty and then just a few days later, out come these emails. Quid pro quo, Clarice.

Except of course it's all just made up.

Who claims it was the Russians that broke in? Clinton's campaign head Robby "What's a Mook" Mook, that's who. According to Mook: "Experts are telling us that Russian state actors broke into the DNC, took all these emails and now are leaking them out through these Web sites."

Ah yeah, sure, "experts." Very clever, trying to switch focus from the DNC screwing Bernie to Trump and Putin.

We're not buying it. And who are these experts anyway? Are they by any chance the same ones that said in June that they noticed strange activity on the DNC servers back in April and concluded they may have been hacked by Russia?

Or are they the ones that provided an in-depth analysis of the attacks and concluded the servers had been hacked by two Russian state-sponsored hacking groups?

Besides, aside from the fact that the hacker posted DNC files online several days after the DNC went public and said a huge trove of other information had been sent to WikiLeaks, who had even heard of Guccifer 2.0 and the DNC hack before last week? Certainly not us.

Of course, we are all playing into Hillary's hands here, talking about Putin and Trump rather than the real villain.

And take note of that last name: Schultz. Sounds a bit... Jewish, doesn't it? You know why? Because it is!

Now, we're not anti-Semitic, but we know plenty of people that are and just like retired Lieutenant General Michael Flynn, who spoke at the recent Republican congress, we are not afraid of retweeting them!

In response to Mook's outrageous attempt to deflect attention on CNN, one completely reasonable member of the public noted that the news network was also probably in on the conspiracy.

"The USSR is to blame!" surmised Saint Bibiana at the handle "@30PiecesofAG" whose profile pic is Andrew Jackson with a Trump "Make America Great Again" baseball hat. But he knows that this time, no one is buying it, noting: "Not anymore, Jews. Not anymore."

To be fair to Flynn, he later apologized saying he'd made a mistake. After all, it was easy to mistake Saint Bibiana as a reliable source, what with the pic of a former US president an' all.

What's even worse is that Bernie Sanders is Jewish, at least a bit. And one of the DNC's plans to undermine him was to suggest that he wasn't Jewish but was in fact: an atheist! (Well, that and the fact that his campaign was wildly disorganized and its supporters occasionally violent.)

Ah, you see. It was the Jews! Undermining other Jews by suggesting they might not be Jews, but never actually going ahead with the plan, which wasn't really a plan but a short email. Unbelievable.

Next page: Back to business
Page:
Tips and corrections
69 Comments