Star Trek Beyond: An unwatchable steaming pile of tribble dung

Trek works when the struggle is within, not when the fights are fast and furious 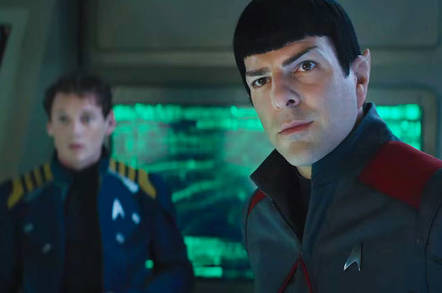 Review The original Star Trek series and subsequent sequels stubbornly and persistently refused to frame their dramas in black-and-whites. Balance of Terror, for example, transformed heretofore-unseen Romulans from villains into tragic heroes over the course of an hour. As happened in so many episodes, the writers avoided the cheap path of good versus evil.

The first run of films started well, but eventually just offered a procession of baddies.

Along the way they lost sight of the single, overarching lesson of half a century of Trek is that the struggle is within us – for understanding – and not against some imagined other.

When Trek can’t get beyond binaries, its finely tuned universe – where most of the sources of human conflict have been resolved – falls apart.

So it goes in the steaming pile of dung that audaciously calls itself Star Trek Beyond, a film that manages to be simultaneously both incomprehensible and unwatchable. Literally unwatchable: many of the scenes are so dark that even in a darkened theatre you have no idea what is happening to whom, nor where it might be happening.

It all starts with Captain Kirk (Chris Pine) going through the motions of yet another same-old same-old day as captain of the Enterprise. He’s bored. He’s looking for a change. So, too, is Spock (Zachary Quinto), which has led to some friction in his relationship with Uhura (Zoe Saldana). The three may be mid-way through their five-year mission, which should be the most exciting tour of duty in the galaxy, yet somehow screenwriters Simon Pegg and Doug Jung, plus director Justin Lin (Fast & Furious) make it seem like another day at the office. Lethargy blankets the crew and makes the characters appear to be going through the motions.

Soon, a plot device appears that – over two interminable hours – convinces everyone that their lives have specific meaning as crew members on the Enterprise. That’s pretty much it. There’s not a lot in Star Trek Beyond that makes any more sense than this.

Krall, the baddie driving the plot (Idris Elba, displaying about 0.01 per cent of his range and precious little of his face because of extensive makeup) snarls and struts and casually sucks the life-force out of Enterprise crew members. Why? We get a hand-wave of an explanation in the last 15 minutes of the film, leaving the viewer even more confused. At least we knew why Khan had a Will to Power. Here, we just get bad zero-gee acrobatics and some throw-away lines about the glory of the eternal struggle.

The rest of the cast make the best of a poor story. Once again, Karl Urban nails his role as Leonard ‘Bones’ McCoy, Simon Pegg does a reasonable job as Scotty, saving everyone’s posterior at the last minute through his engineering skills, the late Anton Yelchin puts in a fine final performance as Chekov, and John Cho reveals something about Sulu that’s probably the worst-kept (and least interesting) secret in show business.

The crew finds a new friend in Jaylah (Sophie Boutella), leading to some light comedy, but not enough to save this meandering wreck of a film. Too dark, too slow, and too unexplained, the middle of the Star Trek Beyond slogs along, without the lift from Lin’s opening action sequences, until the Inevitable Confrontation with Evil.

That confrontation has more false victories than a North Korean military parade. Every time you think they’ve got the baddie – no! – he gets away again. After the second or third escape, you simply stop caring and begin praying for it all to be over. But it’s not, until the reunited crew each learn that their path in life – on the Enterprise – is the right one. Setting the stage, one suspects, for another film in this series.

Although Star Trek’s reboot has proven popular, the three reboot films seem to be more about retracing old grounds than exploring strange new worlds. So far we've had an origin story, Wrath of Khan 2.0, and now the train wreck of Beyond. Instead of looking backward, next time Paramount should reach forward, seek out new life in an old franchise, and go where no Trek film has gone before. ®

Star Trek Beyond is released on Friday, July 22.