Australia gets one-quarter of a minister for national infosec

Greg Hunt moves from environment to Minister For Agreeing With StartupLand 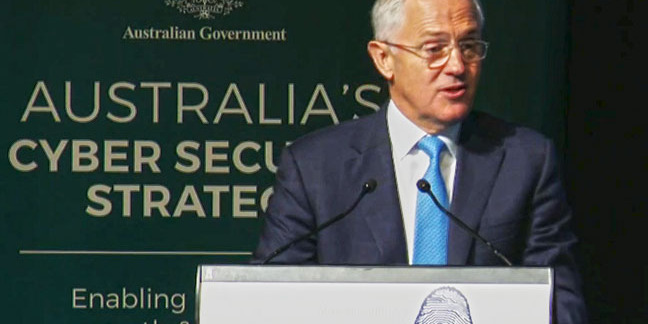 If you were hoping tech would get some kind of boost in the Turnbull government's third ministry, prepare for disappointment.

Mitch Fifield retains communications, and Fiona Nash remains minister for regional communications – which at least means the telcos don't have to spend the time and energy getting to know capturing brand-new ministers.

The other ministerial names that will matter to tech are Greg Hunt, moved from environment to Minister For Agreeing With StartupLand (industry and innovation), and Dan Tehan.

That's a very broad set of responsibilities and one in which the influential veterans' lobby will doubtless occupy plenty of diary time.

The creation of the cyber security portfolio and its location close to the prime minister are, we suppose, symbolic that the government is taking it seriously.

So seriously that it gets one hat in four, worn by a junior minister of small achievement, whose only relationship with defence (where the real infosec fire-power resides) is on the administrative side of the house. It doesn't seem the prime minister expects cyber-security to take up too much of Tehan's time.

Security types can at least take comfort in the fact that Tehan's served as chair of the Parliamentary Joint Committee on Intelligence and Security during the hearings on Australia's data retention regime. Australia's telecommunications industry hates that regime.

Perhaps there's a role beyond the symbolic, but it's hard to imagine what that role might be. Government systems are secured by the Australian Signals Directorate, which exists in the defence portfolio, rather than Tehan's; and perhaps thankfully, the government has not had any significant role in private sector computer security. It has not even managed to create a mandatory data breach notification regime and it's pared back the Office of the Australian Information Commissioner. (OAIC).

Not that this will matter to Tehan, because data breach notification and the OAIC are down the hall, dusty and neglected on the attorney-general's bookshelves.

The attorney-general also had carriage of the only other significant government intervention in infoesc: its attempts to put departmental secretaries in charge of telecommunications carrier security.

Nor do Tehan's background suggest any particular grasp of infosec: he's a political scientist by education, and government held roles as an adviser to the Howard government on tourism, small business, and trade.

So what will terrify the black-hats and nation-state malicious actors of the world will be as minister overseeing Alastair MacGibbon (the PM's special advisor on cyber-security).

Perhaps we could be more enthusiastic about Greg Hunt, as new minister for innovation, industry and science, replacing the hilarious Christopher Pyne.

Once again, the symbolism of the move is at odds with the government's policies. Certainly, Hunt has now spent longer on the front bench than much of the government, so innovation remains a senior ministry.

But in Hunt's previous ministry, the environment, it's hard to locate any successes other than the design of a CO2 amelioration scheme that's at odds with all other such schemes around the world inasmuch as it sees the government pay polluters. In innovation as in cyber-security, there's no history of commitment to back up the symbolism and little policy to be observed other than reading from carbon paper left lying around Silicon Valley meeting rooms.

He established the Digital Transformation Office when Tony Abbott was prime minister, and carried the office over to the Department of Prime Minister and Cabinet after his elevation to leader in 2015. The DTO has the authority of a department able to call on the prime minister's office to get things done, but we're still waiting for authority, budget and personnel to turn into a revolution: after more than a year of operations the DTO has a new gov.au site in Alpha, but precious little to show for its efforts. ®