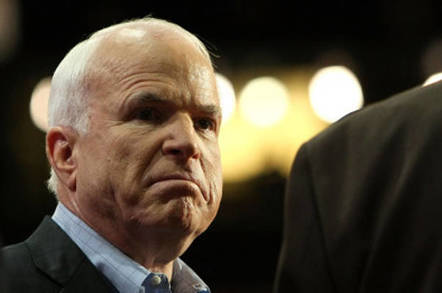 US Senator John McCain (R-AZ) has thrown a hissy fit over the refusal of Apple CEO Tim Cook to attend a Senate hearing on encryption.

Opening the Committee on Armed Services' hearing on cybersecurity this morning, McCain went out of his way to note that Cook has declined the senator's invitation to give testimony alongside three opponents of end-to-end encryption on the company's iPhone.

"I must note for the record that these were not our only invited guests," McCain said.

"This committee extended an invitation to Apple CEO Tim Cook to offer his perspective on these important issues. He declined. I hope he will reconsider in the future so that this committee can benefit from the widest possible variety of perspectives."

Cook's refusal to attend may have had something to do with the fact that McCain had stacked the panel against him. The three other panelists were:

As the hearing progressed and McCain was faced with the fact that all three panelists were effectively saying the same thing, he grew increasingly frustrated at the failure of Cook to serve as a legislative punching bag and repeatedly referred to his absence.

His committee "has subpoena power" McCain grumpily noted, implying that he would compel Cook to attend a future kangaroo court. And at the end of the hearing, McCain still wouldn't let the matter drop and complained that it was "unacceptable" that Cook had failed to attend.

As if there was any doubt as to his agenda, McCain noted that he felt the answer to the current impasse between tech companies and law enforcement over the issue of encrypted communications lies in legislation rather than the creation of a commission to study the issue.

The idea of a commission has been gathering political momentum in recent months and has become a formal policy of presidential nominee Hillary Clinton. With the failure of Congress to pass several pieces of legislation that would have given law enforcement expanded rights to access ordinary citizens' data, the fear among more authoritarian figures in Congress – McCain included among them – is that a commission looking into encryption would undercut their ability to pass laws that give widespread electronic surveillance a legal foundation.

As such, McCain is attempting to use his position as Chair of the Armed Services Committee to push the case that Congress should develop legislation without a commission. Part of that effort is in stressing the apparent urgency of the matter.

As the most high-profile and vocal opponent to those plans, Tim Cook no doubt decided it was not in his interests to play along with McCain. As such, the senator from Arizona was robbed of his straw man, and was notably unhappy about it. ®