HP Inc: Double-digit bounce due on PC prices next month

Because currency. Why haven't we put up printers? Er, no comment 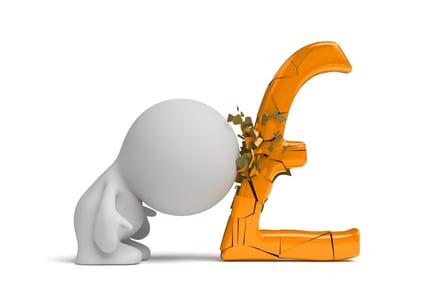 HP Inc has blamed the wobbliness of the British pound for a double-digit price hike in the UK due to kick in from the start of next month on all its commercial PC kit – but for some reason the print range is to avoid the upward swing.

Sterling has slumped to a 31-year low following the outcome of the EU referendum and some American tech vendors reacted by upping local prices for UK customers: Cisco sells in dollars and so its price list was immediately tweaked in line with the fore-ex flux. Dell came next.

In a note to channel partners, HP UK and Ireland channel sales, education and SMB director Neil Sawyer confirmed it was raising prices by “circa 10 per cent” across its PC portfolio from 1 August.

He said the UK exiting the Union and a 17 per cent appreciation of the US dollar versus the local currency in the year to June had forced its hand.

The rise “applies to all HP commercial/ business products” including desktops, laptops, mobility “solutions” and what the exec termed as “value technology”.

“As always, you may freely determine your resale price to your customers,” Sawyer told channel types in the note.

We called HP to ask why printers and perhaps more importantly consumables weren’t included in the hike and were told not to expect any further comment.

Presumably, HP pays for components in US dollars and is under the same margin pressure when it translates local money into US dollars.

But the company doesn’t make big money on printer boxes - the profit flood comes from toner cartridges, so it could also be that HP doesn’t want to limit the installed base for its printer hardware. ®