Law attempting to catch up with technology 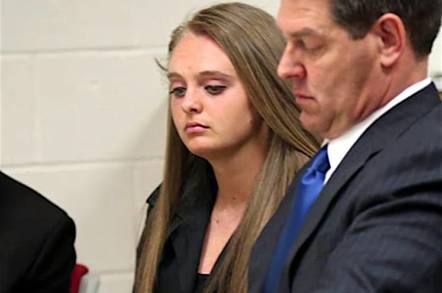 Analysis A teenager will stand trial for sending dozens of texts to her boyfriend encouraging him to take his own life.

Massachusetts' highest court rejected an appeal from Michelle Carter's legal team that the texts to Carter Roy back in 2014 were protected under the First Amendment.

She now faces an involuntary manslaughter charge in the US state for what a grand jury said was a "systematic campaign of coercion" that had a "direct, causal link to his death."

Although Roy, 18, suffered from mental health issues and had set up the equipment to kill himself (a generator pumping carbon monoxide into his truck), Carter – who was then 17 – sent numerous messages urging him to go forward with his plan.

The messages were subsequently made public by a district attorney in a court filing in response to her lawyer's attempts to dismiss the involuntary manslaughter charge. Among the many she sent urging Carter to go through with the suicide were the following:

It is, however, a text that Carter sent to a friend after Roy had suffocated that prosecutors are most interested in. According to court documents, she texted:

His death is my fault. Like, I honestly could have stopped it. I was the one on the phone with him and he got out of the car because it was working and I fucken [sic] told him to get back in.

Although everyone agrees that Carter's actions were morally reprehensible, the case represents a novel case in law, and the legal arguments will revolve around whether what she did was illegal. At the heart of it is the fact that she was not present but was communicating over a mobile phone.

Carter's lawyer Joseph Cataldo notes that the judiciary has already adjusted the traditional legal definition of manslaughter to make prosecution possible. "They created new law here in Massachusetts and applied it retroactively," he told People magazine after the Supreme Judicial Court decision.

Cataldo also argued that the release of Carter's text messages did not account for her previous efforts to encourage her boyfriend to seek psychiatric help.

The critical question, however, Cataldo argues, is: "Did he commit suicide causing his own death, or did she somehow cause his death? Because he took all of the physical acts and she was not present, I think a jury will not convict her."

In the Supreme Judicial Court ruling [PDF], Justice Robert Cordy argued there was "probable cause to show that the coercive quality of the defendant's verbal conduct overwhelmed whatever willpower the victim had to cope with his depression." But Cataldo points out the legal standard for manslaughter is the higher bar of "beyond a reasonable doubt" rather than "probable cause."

Traditionally, the fact that Carter was not physically present would make such a conviction unlikely. But a significant part of the relationship between the two was carried out over text messaging and phone calls and so, some argue, the previous interpretation of the law is outdated.

There is also the fact that she did not help him. She knew of his plan and his location but did nothing to assist him. The legal question in that case is whether she actually impeded his ability to get help.

And then there is the question of guilt, something that she appears to display – along with a recognition that she was in part responsible for Roy's death – in the text message sent to her friend.

In many other aspects of law, increasingly the answer is yes. Just last week, the United Nations ruled that offline and online human rights were one and the same. And there are numerous examples of situations where online threats have been taken as equivalent to physical threats and have been prosecuted.

In this case, that online/offline question will move to the peak of the criminal justice system: a charge of manslaughter. ®