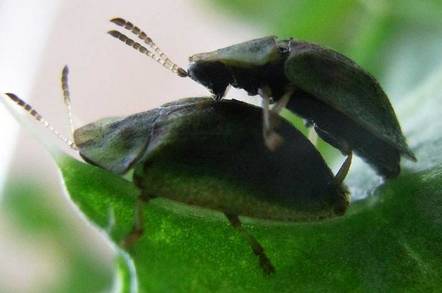 An international team of researchers has discovered how beetles with hyper-long penises make the beast insect with two backs.

The research was presented at the annual meeting of the Society for Experimental Biology, and shows how sexual selection changes over time.

Sexual selection is the main driving force for the range of diversity of genitalia seen in the animal kingdom.

In tortoise beetles (Cassidinae), males have evolved to have hyper-long penises – equal to the insect's full body length – in order to handle the female’s complicated spermathecal duct, which is coil-shaped. Many female insects have spermathecal ducts used to store sperm before fertilising their eggs.

Length is not the only factor needed for better chances of reproduction. Males have to be quick, too. In the natural world, mating is a dangerous act as both parties are more vulnerable to predators, explained Dr Yoko Matsumura, co-author of the paper and a research fellow at Kiel University.

To study how male tortoise beetles have adapted to such time-pressured environments, researchers analysed the structure and function of their penises. First, they dissected the sexual organs of four male and three female tortoise beetles and subjected them to laser lights of different frequencies.

“Animal bodies are composed of many different chemicals and some have special properties; they can emit light when they are excited by light of a specific wavelength,” said Matsumura. The autofluorescence gives researchers an idea of the chemical composition of the beetle’s genitalia and makes them easier to study under a microscope.

A constant force was then applied along different parts of the penis and the curvature was measured. Researchers found that the penis had a “stiffness gradient” – it was stiffest at the base and softest at the tip. To investigate how this tied in with the function of the penis, researchers modelled the properties of the genitalia using computer simulations.

The fourth option proved most adept at speedy beetle copulation, leading researchers to believe that the soft tip makes it easier to navigate through the female’s tricky helical spermathecal duct.

The length of the duct ensures that only males with the longest penises get to fertilise eggs and reproduce, explained Matsumura. Another benefit of having a hyper-long penis is that the male can scrape the female’s duct free of other males’ sperm to ensure his genes are successfully passed on to the next generation.

“Our research approaches sexual selection differently. Instead of asking 'why is the beetle’s penis hyper-long', we ask 'how does it work?',” Matsumura told The Register. ®