London Stock Exchange's German mega-merger: It's a go, despite Brexit

Playing politics with the IT jobs axe 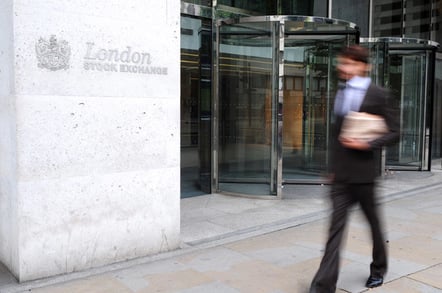 The London Stock Exchange takeover by its German competitor Deutsche Boerse (aka the "Merger of Equals") should still be going forward despite Brexit, but a planned vote by their respective shareholders throws another wildcard into how job cuts are shared between London and Frankfurt.

The £12bn deal, announced in March, is due to be put before shareholders today and those of Deutsche Boerse on July 12.

German politicians and regulators have said in the wake of the UK referendum result the deal could not go ahead unless the new head office were based in the EU.

The German unions and the central state of Hesse, where the Boerse is based, were already unhappy that the HQ of the new company would be in London. It's possible they could use Brexit to try to make London bear more of the pain. Neither the London Stock Exchange Group (LSEG) or Deutsche Boerse have said which of their duplicated systems will be canned or what percentage of their planned 1,250 job cuts would be made up of IT Pros to hit the promised £350m in cost savings.

It is likely that a large percentage of the job cuts will be in tech, even if support and physical hardware has to be in London to allow for high frequency trading. That’s because a stock market these days is pretty much a technology company like eBay. It’s not surprising that Chris Corrado, the LSE's chief technology officer, is an eBay alumnus and that as well as owning the Borsa Italiana, the LSEG flogs tech as far afield as Mongolia, Johannesburg, Casablanca and other national markets, with a nice profit centre in consulting.

The German plan for creating the world’s second largest exchange envisages itself at the core with local exchanges in each country, being conduits into a more liquid, cheaper and safer market, which seemed easy before the referendum.

The clear business logic is for London to be the HQ since it is still the world’s most important financial centre, having last year prised leadership back from New York’s cold dead hands. Frankfurt, on the other hand, is only 14th, and so this is DB’s chance to break out of those limited horizons. Of course the Z/Yen rankings (PDF) were pre-Brexit, but finance is critical to the UK, comprising 12 per cent of its GDP and providing 2.2 million jobs.

However, that’s logic. This is now politics.

Even pre-Brexit, politics meant some IT jobs would have been kept in the wrong place to placate the Hesse state government. German politicians want the horde of high paying jobs the new arrangement will support and their regulators have been pressing for trading and clearing to take place on Eurozone soil. They dislike their inability to bully/regulate markets. Last year the European Central Bank was taken to the European Court when it tried to push through a “location policy” that the UK government fought on the grounds it was discriminatory under the Single Market, which we’re (probably) leaving, but won on the more prosaic grounds that the ECB simply does not have the legal competence to create such a rule.

To do this will take a change in EU law that will take quite some time and require a degree of unanimity that will take a lot of horse-trading to achieve within the remaining members. It may be that the merger gets caught between two sets of national interests, each insisting that they are the rightful location for the merged exchanges in the squabble.

This is the latest round in an age old fight where Brussels has never liked the way Europe’s top financial centres are the City of London, then Canary Wharf, followed by Mayfair, but the occasional outburst of competence by British politicians aided by the corruption and entertaining work ethic in Paris have always made it slow-going.

The 500-700 or so jobs directly at stake are a tiny per cent of the 350,000 UK IT pros who work in finance, but there is little doubt that Brussels will use it as a stick to beat London, which adds more regulatory potholes for the deal to fall into – as well as a challenge for the 50 per cent of management in the NewCo that will come from London.

What systems will be affected?

The listed equity market for big firms is the thing we see on the news, but it’s only one component of what you need for modern banking. LSEG has the Turquoise dark pool, AIM for smaller companies, trades interest rate options, equity derivatives, indices and bonds, so the idea of moving much of it to Frankfurt, where the market for some of these products barely exists, is fanciful. London’s infrastructure, both technical and financial, is extremely robust; the turmoil of the last week may have stressed traders, but their systems merely ran a little warmer.

Although Sri-Lanka-based MillenniumIT Software is at the core of LSEG’s trading systems, London’s depth in financial technologists outclasses that of Frankfurt, so even if post-Brexit politics means the HQ is forced to be in Frankfurt, the customer base will remain in London and the world… unless, of course, Brexit leads to London going under as a market.

The merger is not just about chopping the costs of running trading systems but - post financial crisis - banks need to put up a lot more collateral and margin when trading. Hence the ambition of pooling them across not only the UK and German markets but across the whole of Europe.

To avoid the failure of one bank taking out those it does business with and contagious collapse taking out the whole economy, regulators are coercing financial institutions to trade with each other through clearing houses.

The shock absorbers in this mechanism are the large amounts of collateral and margin the banks have to put up to cover their possible default. This is colossally expensive for them (and thus your pension fund) and inevitably they have too much in one pot whilst running low in another, so the fewer clearing houses they have to use, the better. Yes, I know this is logic of sci-fi movies where the “safe new big thing” destroys the Earth, but most regulators don’t watch Doctor Who.

Clearing and the accompanying risk management means that the IT project will generate quite a lot of work to comply with current and upcoming regulations and the hoped for increase in trading volumes could keep the merged company healthy. Another set of costs for banks and jobs for ITpros is migration from whichever systems are chopped by the new organisation to reveal the “strategic” ones.

With all this going on, the July 4th vote by shareholders takes place in the centre of a storm formed by technology, regulation and British access to European markets – and the random walk of the pound means that DB shareholders aren’t entirely happy either.

The merger of the London Stock Exchange and the Boerse should give us a first look at how post-Brexit financial markets will work. ®

Dominic Connor used to boss IT pros and quants around in banks, and now recruits people for less crappy jobs in the City.