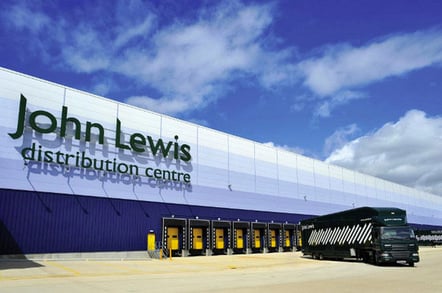 Companywide that’s 396 physical shops; it’s a major step up for Coby because Waitrose comprises the vast majority of that number – 349.

It also covers online and the behind-the-scenes warehousing, logistics and call centres.

A company spokesperson told The Reg that in this newly created role, Coby’s job would be to focus on co-ordinating IT investments across the Partnership to use technology “as effectively as possible".

“This will mean, for example, co-ordinating decision-making and strategy and setting common standards for our IT teams across the Partnership,” a spokesperson told The Reg.

IT is “at the heart of our business and is fundamental to the future success of the Partnership,” the spokesperson said.

The John Lewis and Waitrose IT directors will continue to report to their divisional managing directors but currently coordinate with Coby.

The 152-year-old John Lewis is now looking for a new head of IT as Coby moves up. Coby will report to group finance director, Patrick Lewis.

John Lewis Partnership, like other major retailers, is trying to ride two waves of disruption in their sector – technology and new competitors.

The former challenges where and how people shop and the experience they expect, including near-immediate delivery. The latter is seeing off price-competitive entrants like Amazon with its near infinite stock. Part of the answer has seen firms fall back on tech to unify selling and so-called customer “experience”.

Coby joined John Lewis in 2011 from flag-carrier airline BA, and is architect of John Lewis’s mega, four-year Oracle ERP rollout revealed by The Register in 2014.

The Oracle ERP rollout replaces different legacy systems and is part of a substantial infrastructure IT investment to modernise and support business change.

In its annual report to January this year, John Lewis said that online sales now accounted for 33 per cent of John Lewis’ business, with sales growing 17.3 per cent in the last year – compared to a 1.0 per cent drop in shops.

Click and collect grew 11 per cent in the last year and accounted for half of those online orders, with sales through devices growing by 34 per cent and smartphones 86 per cent. ®