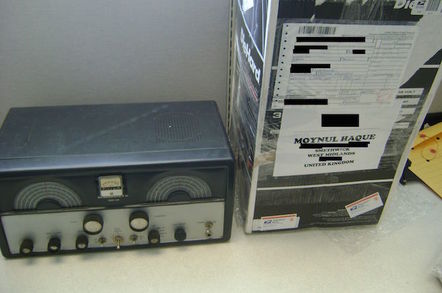 So it wasn't video that killed the radio star

A West Midlands man who bought gun parts on the so-called Dark Web has been sentenced to 10 months in prison.

Moynul Haque, 21, paid about £900 in Bitcoins for the slide, barrel and recoil spring of a Glock 9mm pistol.

The unnamed seller hid the parts in an antique radio and posted it to Haque from an address in Michigan.

The parcel was intercepted by US customs officials, who promptly contacted the UK’s National Crime Agency. The NCA searched Haque’s home in Smethwick and seized a laptop and a small quantity of amphetamines.

With the assistance of the West Midlands Police Cyber Crime Unit, they found that Haque had tried to check the status of the parcel sent from the US.

Haque paid well over the odds for the parts. And his motives remain a mystery, according to local paper The Express and Star's court report.

Prosecutor Philip Beardwell said: "There is no evidence he was part of a network or received money to buy the parts on someone else's behalf. There is equally no evidence of any links to terror groups. It is a very curious case."

According to Haque's defence counsel, he was unemployed when he purchased the gun parts – and playing a lot of video games. His "somewhat reclusive" client may have "simply not thought through the full extent of what he is doing when ordering the parts," The Express and Star reported.

Haque pleaded guilty to the importation of firearms and possession of class B drugs. He was sentenced at Wolverhamption Crown Court on 28 June. ®