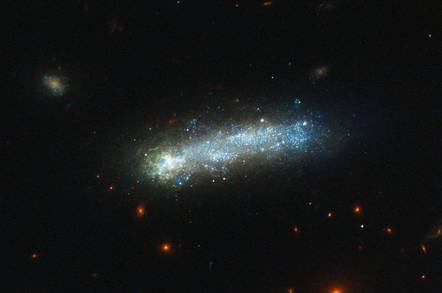 The Hubble telescope has captured images of a rare tadpole galaxy glittering with bursts of star formation, swimming in the black pond of space.

In a collaboration between NASA and the European Space Agency, the telescope was used to take high-resolution images of cosmic objects across a range of wavelengths. Hubble has taken images of thousands of galaxies but coming across a tadpole galaxy is rare.

It is estimated that in a sample of 10,000 galaxies within the local universe, only 20 would be tadpole galaxies. They are more common amongst local galaxies with extremely low metallicities - a sign that they were formed earlier in the universe.

Tadpole galaxies can be identified by a bright round star-forming head that fades along the body, stretching into an elongated tail with weaker star formation.

The galaxy - known as LEDA 36252 or Kiso 5639- was studied due to its interesting properties. With its swirling pools of interstellar gas breaking off into filaments and clusters of old and young stars, it is an ideal laboratory to study star formation in a galaxy.

An international team of astronomers found that the head is a stellar nursery rich in stars and gas with a mass approximately equivalent to a million Suns. Wisps of hydrogen gas dotted with young stars trail around the head. The head also has crevices from stellar winds and supernovae explosions that have blown away surrounding gas.

At the other end, the tail is made up of four regions of older and less massive star clusters. It it gently rotating at a speed of 35-40 kilometres per second, and has a diameter of 2.7 kiloparsecs - much smaller than the Milky Way. ®