And you know what? Her policies are surprisingly sane 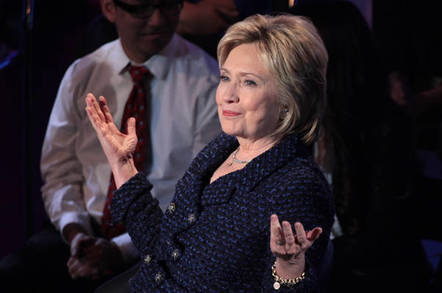 Hillary Clinton today outlined her policies when it comes to tech – and they are surprisingly good.

The presumptive Democratic presidential nominee published a lengthy "Initiative on Technology & Innovation" on Tuesday covering a wide range of issues from education to net neutrality.

Demonstrating the fact that she – and her team – have been in government for some time, and the fact that the former First Lady and senator is renowned for being somewhat of a policy wonk, the initiative covers not just high-level statements and broad policy goals, but a range of concrete proposals.

Washington is not renowned for its grasp of tech policy, but clearly Clinton's trips to Silicon Valley seeking endorsements and donations have paid off. If there is anything to fault, it's that the proposals are a little too Silicon Valley.

They include an emphasis on STEM education (science, technology, engineering, and math), as well as a proposal to give the first 10 or 20 employees of a startup the ability to defer student loan payments plus "forgiveness of up to $17,500 of their student loans after five years." Oh, and a free green card to international students doing STEM Masters and PhDs at accredited institutions.

It's not hard to see how many other students and industries would baulk at such preferential treatment.

When it comes to the big tech policy issues, Clinton is all Google and no AT&T, really demonstrating how the power axis has shifted in recent years.

She comes out strongly for net neutrality, promising to defend it. And she name-checks the Stop Online Piracy Act (SOPA) as an example of what she will oppose if chosen as president.

She proposes expanding the United States Digital Service (USDS) and making digital services a "permanent priority" for the federal government. The USDS has been the bulwark of the tech industry in Washington, from which it has attempted to modernize the approach of many other departments.

Hillary is all-in on expanding open data in government: the provision of which is like catnip to developers. She says she will continue support for a number of federal tech programs that few will have heard of: 18F, Innovation Fellows, and Innovation Labs.

As well as lending support to existing positions and programs, she also proposes a new "Chief Innovation Advisor" for the federal government, aimed at "reducing regulatory barriers to developing new products and services."

In fact, the only area where Clinton does not give full backing to the tech industry is on the thorny issue of encryption. On this, she is in a bit of a bind, having come out publicly during the Apple-FBI saga as supportive of an effort to find a way to give law enforcement access to people's phones – while being careful not to use the word "backdoor."

The tech industry has pretty solidly lined up behind Apple in advocating for strong encryption and devices that law enforcement will not be able to get into, because the tech companies will not give themselves the ability to get into them.

Clinton's compromise on this is to kick it into the long grass, but offers support to the idea of a national commission on digital security and encryption.

"This commission will work with the technology and public safety communities to address the needs of law enforcement, protect the privacy and security of all Americans that use technology, assess how innovation might point to new policy approaches, and advance our larger national security and global competitiveness interests," the paper says.

All in all however, this is a solid, relatively thorough and undeniably pro-tech set of policy positions. After all, she does have extensive experience with email servers and the delete key.

As for Donald Trump: we've yet to hear anything about his proposed tech policies. In fact, beyond building a wall between the US and Mexico, repealing Obamacare, and defending gun rights, there isn't all that much that we do know about Trump's policies. And even when he does start to form a policy, it will literally change on an hour-by-hour basis. But then that is unlikely to come as much of a surprise. ®