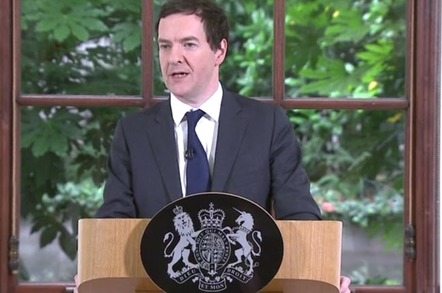 George Osborne made a statement Monday morning designed to calm the markets and business jitters since the referendum result to leave the EU.

Osborn stated the fact that Article 50 could only be triggered by the UK – not the EU.

Once enacted, there follows a negotiation period on the terms of the UK’s relationship that can last up to two years.

“In the mean time, during the negotiations that follow, there will be no change to people’s rights to travel and work and to the way our goods and services are traded or to the way our economy and financial system is regulated,” he said.

He also kicked the so-called “punishment budget” into the lap of Britain’s next PM.

Before the referendum, Osborne warned of a £30bn package of tax rises and spending cuts should Britain vote to unplug from the EU.

On Monday he called it “perfectly sensible to wait for a new prime minister” before taking any such action.

The Institute of Directors, meanwhile, has found members believe the vote will be bad for them, hitting jobs and investment.

The poll of more than 1,000 IoD members taken immediately after the Leave vote found while more than one-third would continue to hire at the same pace.

But a quarter planned to freeze recruitment, with five per cent expecting to fire staff.

One in five are considering moving some of their operations outside of the UK and just one per cent will bring operations back.

“This was our European base – now there’s greater uncertainty over two years. Two years is within our planning cycle – where do we add offices and hire, that’s now in question,” he told The Reg last week.

Separately, the IoD has advised British firms eager to remain part of the EU trading network to start drawing up plans.

These include investigating the opening of offices in Ireland and to “think finance.” It warned on investment, particularly in tech and R&D, and in regional funding that will now disappear without the EU.

“Maybe now's a good time to move your overdraft to a UK bank and sound out your investors. Other funding may also be at risk," the IoD said.

"Many businesses in the science and technology sectors receive EU research funding, while in poorer regions Local Enterprise Partnerships feed EU money to small business through loans and grants.”

The UK is accountable for 26.5 per cent of Western Europe’s IT spend, Gartner said.

The analyst told The Register on Friday the uncertainty caused by the Leave vote would now freeze spending on technology to the tune of $4.6bn. ®