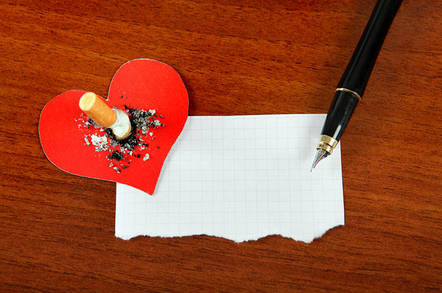 Update Tension between staff and management at the European Patent Office (EPO) has descended into open warfare with the publication of an open letter by some staff, calling on the organization's Administrative Council to get rid of its president.

The letter, signed by a group calling itself the EPO-FLIER Team, goes through an extensive catalogue of problems at the organization, but focuses on its claim that president Benoit Battistelli is undermining the organization through his actions. It has been emailed to all the heads of delegation of European countries in time for their meeting later this month.

"Mr Battistelli is causing immeasurable damage to the Office," reads one part of the three-page letter [PDF], "he is now untenable."

The authors are remaining anonymous, they say, "due to the prevailing harsh social climate and absence of rule of law" at the EPO, and provide a detailed understanding of the internal systems of the organization.

They call on the EPO's Administrative Council – the only group that can fire Battistelli – to act in the organization's best interests.

"To the neutral observer there is no doubt: this Administration is professionally incompetent, and the supervisors [the Council] are doing nothing about it," it reads. "The President and his cronies have to be stopped. By you. Now."

As for the claims within the letter, they say that Battistelli's reform efforts – built around approving more patents at a faster rate – are leading to "rubber stamping in order to meet entirely arbitrary production targets."

It also makes the serious claim that the EPO's quality checking system has been designed to always return positive results, regardless of actual quality.

"The EPO's own quality measuring system 'CASE' suffers from a built-in conflict of interest. The way it has been designed, it will always indicate excellent quality, no matter what the actual quality is," the letter states.

It goes on to highlight several specific proposals for reform put forward by the Administration that undermine the rights of staff, including the ability to fire examiners if they don't get through what the administration feels is a sufficient number of patent applications.

Changes at the EPO, including the dismissal of staff that have resisted reform efforts, are causing knock-on impacts, the letter claims, and potential recruits are staying away. "The Office no longer attracts the same caliber of staff and therefore has had to resort to recruiting what it gets," the letter claims. It says that the EPO has dropped language and geographical requirements due to the inability to attract sufficient applicants.

And finally, it digs into Mr Battistelli's own behavior, which it says is "like an adolescent," while mocking "the President's luxury fortress" at the top of the EPO's headquarters in Munich.

It points to a number of "high-profile events that seem to be mainly instigated for the greater glory of the President," and his hiring of several personal bodyguards – seemingly in response to staff cutting the brakes on Battistelli's bicycle – as symbols of his imperious reign.

The letter ends by noting that the Administrative Council will be "in the spotlight" later this month, and pleads: "Please do what needs doing: restore a constructive climate at the EPO."

We have asked the EPO for a response to the letter. We will update this story as soon as we receive one. ®

We received a formal response from the EPO: "The EPO does not comment on spurious accusations made anonymously, particularly in cases such as these where the legitimacy and origin of such correspondence is wholly unverified."