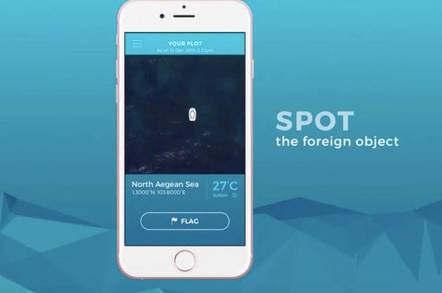 Update The developers behind a much-hyped, headline-grabbing humanitarian smartphone app are in damage control mode after their software was found to be junk.

The iSea app for iOS was billed as a way for users to help rescue refugees adrift at sea by combing over satellite imagery of oceans on their smartphones and flagging any shots of possible boats or debris with the coordinates for investigation.

The app, which lists Migrant Offshore Aid Station (MOAS) as a "partner," was hailed as a humanitarian effort and was the subject of glowing profiles by national news outlets in both the US and Europe.

According to critics, however, the app in its current form is all but useless. You can't use to rescue anyone: in recent days, an investigation into the program uncovered evidence suggesting the code simply does not work as claimed.

Specifically, the images the app serves up to people are not live real-time satellite shots, but rather old-of-date and empty stills pulled from Google maps. You'll never spot a refugee in these lifeless images.

@SwiftOnSecurity The Map/images is from Google Maps (which means out of date. The weather is for Misrata, Libya https://t.co/rzP58dpvDO

Others who have examined the app say it only uses a single image:

@SwiftOnSecurity it is at least talking to an API but seems to link to a static image pic.twitter.com/AbmYB0KUAB

@alxknt @SwiftOnSecurity Fiddler shows metadata for the image. Processed by photoshop at the very least pic.twitter.com/mEtCSgy5C4

It seems the public's suspicions were well-founded. Grey Group, the advertising agency associated with the campaign, has since posted a statement saying that the app is still in development and admitted the images being served are not real time.

"During this testing period, the satellite images available are not in real time," the statement reads.

"Grey for Good are still working to optimise the technology, but we are proud of what we have achieved so far and are grateful to all those who have shown interest in helping to improve the app further."

The iSea app has been pulled from the iOS App Store in the US. MOAS did not respond to a request for comment. ®

A spokesperson for MOAS, the group referenced on the iseeapp site "#partner" section, said his group was not involved in the app.

"The Migrant Offshore Aid Network did not develop the app with Grey for Good nor do we feel that there [are] any advantages to having the public scan old sat images for potential disasters that in reality unfold in seconds," the spokesperson said.

"MOAS has performed life and death rescues in real time using two ships, commercial drones and Search and Rescue Crews in the Central Mediterranean since 2014. The majority of our rescues are coordinated in real time from the Rome Rescue Coordination Center in which MOAS often takes the lead. Saving lives is a serious business, with serious consequences for not maintaining the highest standards of professionalism.

"All we can say on the developers' behalf is that the App probably sounded interesting in concept form but failed miserably in execution. We were asked to support the launch of the app in concept only. So we were included in a press release," added the spokesperson.