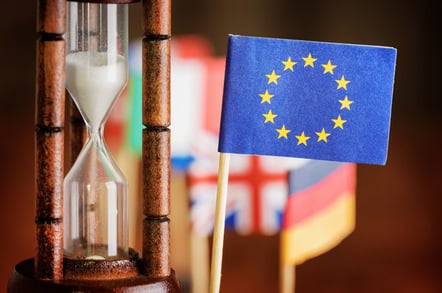 Exclusive Microsoft invited a UK government cabinet minister from the Remain camp to give its troops the big sell on why Blighty should stay in the EU – but shelved the meeting following the murder of MP Jo Cox, the company confirmed.

The senior politician was to debrief the Windows giant's Brit workforce on the benefits of staying inside the EU today, just days before the British public votes in the increasingly tedious referendum.

A PR rep at Microsoft confirmed plans for a “Cabinet level minister” to deliver a speech to its local workforce but did not reveal the name of the individual.

He confirmed the event was “cancelled” after the Labour MP Cox was killed on Thursday at a local constituency surgery in West Yorkshire.

El Reg understands the Remain campaigner was due to give the speech to Microsofties at the firm’s Reading HQ.

We asked the PR man if Microsoft had similarly asked rivals from the Brexit faction - for the purposes of balance - to also detail their plans to for upping sticks and leaving the EU.

“I would be surprised if that was the case,” we were told.

Microsoft, like many of its tech contemporaries including HPE, IBM, Cisco and EMC, nailed its colours to the EU mast when UK CEO Michel van der Bel last month penned a blog to his 5,000 staff.

In it, he said being part of the EU made the UK an attractive place to invest and for this to continue the status quo needs to be maintained - of course he only mentioned this after stating the way people choose is a personal decision that his company will respect.

We asked Microsoft why it felt the need to invite a senior spokesman for the Remain camp to talk to staff and if the blog was not sufficient in making the case. Microsoft refused to provide further comment.

El Reg contacted both the Remain and Leave camps for comment, but suspect neither set were able to hear email alert pings above all the bullshit they are talking. ®

Our culinary heritage must be protected