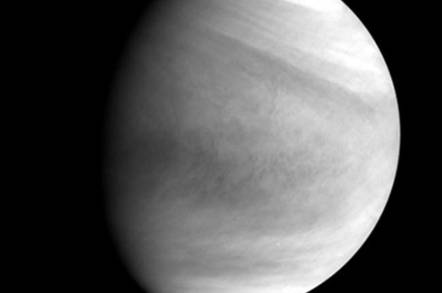 A team of planetary scientists has found that an 'electric wind' whisks away water in Venus' atmosphere, which explains why the terrestrial planet is so dry, according to new research published in Geophysical Research Letters.

Venus, the second planet from the Sun, has a thick atmosphere surrounded by hazy clouds. It is the most Earth-like in terms of size and gravity, but lacks the vast oceans and seas which cover earth's surface. It is believed that Venus did harbor water in its past, but it was boiled away as its surface temperature rose to 470 degrees Celsius.

Its heavy atmosphere should mean that the water is trapped as steam, but measurements show that it has 10,000 to 100,000 times less water than earth's atmosphere. A team of scientists led by NASA has found that the missing steam is blown away by an 'electric wind.'

When water molecules rise to the top of the atmosphere, sunlight makes them dissociate and they are split into ions. Venus' strong electric field – which is five times greater than earth's – accelerates the charged ions to speeds faster than 25,000 miles per hour (40,234 km per hour). At this speed, gravity can no longer contain the ions and they whizz off into the blackness of space.

"It's amazing and shocking," said Glyn Collinson, a scientist at NASA's Goddard Space Flight Center and lead author of the study.

"We never dreamt an electric wind could be so powerful that it can suck oxygen right out of an atmosphere into space. This is something that definitely has to be on the checklist when we go looking for habitable planets around other stars."

Although it is believed that all planets have an electric field, it is the first time that scientists have managed to measure how powerful they can be. The team used the NASA-SwRI-UCL electron spectrometer aboard the ESA Venus Express spacecraft.

Co-author Professor Andrew Coates of the UCL Mullard Space Science Laboratory, who leads the electron spectrometer team, said: "We found that over 100 metric tons per year escape from Venus by this mechanism – significant over billions of years. The new result here is that the electric field powering this escape is surprisingly strong at Venus compared to the other objects."

It is unknown why Venus' electric field is so large. "It's just an epic slap in the face of all of our theories, because there was no reason to expect that Venus' field should be any different than Earth's," Collinson told The Register.

In a tweet, Collinson described the process as a "self-lick ice cream cone," as the electric winds happening in the atmosphere are generated completely by Venus.

The new finding will have an impact on astronomers studying planets that might be habitable, the researchers said.

"It's no good having a planet around a star with all the right conditions for oceans, if over time it loses all its atmosphere to space. So, we can add a weak electric wind to our check-list of things that we're looking for when it comes to looking for new Earths around other stars," Collinson said. ®

Japan's Venus probe power plight panacea: Turn it off and on again ...and again and again...

We hardly noticed at first, but records revealed plenty about how star-stuff sails solar winds

Nine years of exploration ending up as Venusian rubble