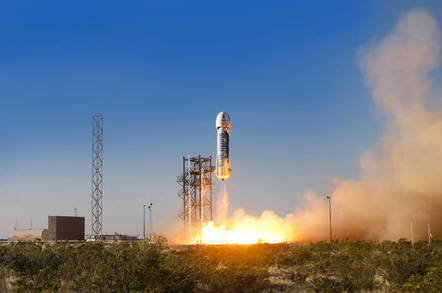 In spite of the SpaceX hard landing last week, successful booster landings are becoming almost routine, but if you haven't already watched Blue Origin's successful test over the weekend, it's at the bottom of this story.

Jeff Bezos' outfit also dropped its crew capsule on two parachutes, having deliberately “failed” the third 'chute as a test.

On June 16, the flight had to be rescheduled to Sunday when an O-ring leaked in the capsule's nitrogen gas pressurisation system.

Once everything was ready, though, everything seemed to go smoothly. The New Shepard booster landed without incident, and while the capsule's landing looks like it would be a rough ride for anyone inside, Blue Origin's Tweet indicates the company's happy with the test:

No explosions, no failures, and no rapid unscheduled disassembly? Try to stay awake through the video. ®