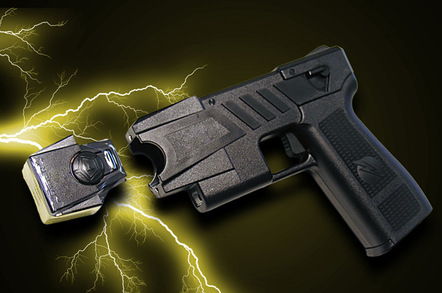 A man in Llanelli has died after being shot with a Taser by officers from Dyfed-Powys Police force.

As with all deaths during or following police contact in the UK, the matter has been referred to the Independent Police Complaints Commission (IPCC), which confirmed to The Register that: "IPCC investigators have been deployed to an incident in Llanelli in which a man has died following contact with police."

Officers were stated to have attended the incident, "and during engagement with the man, it is understood Taser was discharged. The man became unresponsive and was subsequently pronounced dead."

The IPCC stated it "has begun an independent investigation".

Although Tasers were introduced as non-lethal weapons to allow the police to deal with violent suspects, there have been a number of deaths following their use by police in the UK.

According to a National Police Chiefs' Council blog post, "Officers won’t always know the people they are faced with or their medical history. The officers still have to deal with the circumstances presented to them."

The blog added: "If an officer becomes aware that the person they are dealing with is suffering from a condition, they will treat the person as a medical emergency and get them to hospital."

A spokesperson for Dyfed-Powys Police told The Register that the force was "called to an incident in Llanelli yesterday evening (June 14), relating to serious concerns about the behaviour and welfare of a man. A man subsequently died."

"A full investigation has commenced, and Dyfed-Powys Police referred the matter to the IPCC, who will now conduct an independent investigation. We are fully co-operating with them," added the force. "Our thoughts are with the family of the man." ®

Two skeletons flashing on and off with one gun

US cop body cam maker says it won't ship face-recog tech in its kit? Due to ethics? Did we slip into a parallel universe?

Baton, dog and pepper spray fail to do the trick

New Taser made to take down angry bears, moose