'I am not a lizard' Zuckerberg proclaims in public Q&A 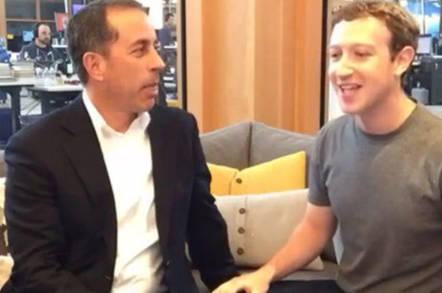 Mark Zuckerberg has denied that he is a lizard during an hour-long Q&A session online, when questions from the internet got a bit silly – who'd have thought it.

"I'm gonna have to go with 'no' on that. I am not a lizard," he said in response to an online question.

"But keep the high-quality comments coming in please, this is surely on track to be a great live Q&A if we continue getting stuff at that level of quality," he added in sarcastic tones.

The questioner was most likely referring to the theory promulgated by British goalkeeper-turned commentator-turned raving loon David Icke that the planet is in the thrall of shapeshifting lizard people – the Anunnaki from the fourth dimension (don't ask).

Icke proposes that these super-intelligent creatures used human blood to shapeshift into our form to interbreed with mankind and use the hybrid species – known as the Brotherhood – to control us. Members of the Brotherhood include the British royal family, the Bush clan, business leaders, the Bilderberg Group, and the late Bob Hope.

Over six million people tuned in to the Q&A, so you'd expect a few nutty questions, but since the questions were presumably prescreened, it seems Zuckerberg chose to address the issue with a direct denial. Tin-foil hatters will, of course, take this to mean he's being deliberately disingenuous.

However, Zuckerberg's plan for memory manipulation will drive them to spittle-flecked panic. Zuck explained his plans to run a Facebook feed direct from the brain and right into the world's frontal lobes.

He said that virtual reality was the next logical step for Facebook, with the intention of letting others experience what a user does as directly as possible. But new research suggests that in a few decades, boffins could go one better and copy memories directly onto people's consciousness.

He cited research from MIT by Steve Ramirez and Xu Liu, who managed to implant false memories of terror in the brains of mice. They took brain readings from a mouse being placed in a metal box and given a mild electric shock and identified the portions of the brain that were stimulated in the incident.

They then genetically engineered a set of mice to make those sections of the brain light-sensitive. By placing a different mouse in the box and stimulating the brain cells, the new mouse showed extreme signs of fear.

Zuckerberg said that there were huge hurdles to be overcome before this kind of technology could be safely used with humans, but the ability to let others experience emotions and experiences directly would be a killer app. But it's at least 50 years away, he said.

The Facebook CEO was joined for 15 minutes by comedian Jerry Seinfeld, who looked distinctly unimpressed when Zuckerberg explained his plans for a robot butler powered by artificial intelligence software that could do chores around the house.

"Isn't it funny how we work so hard to just eliminate a little bit of effort? To get the door is not that much work, but we're going to put in a lot of work to save us from walking to the door and opening it," Seinfeld responded. ®