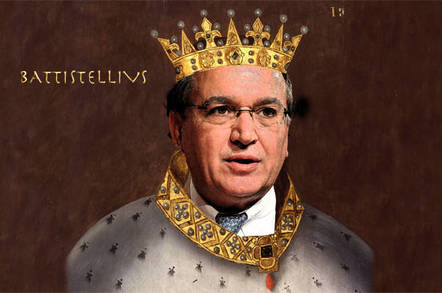 President of the European Patent Office (EPO), Benoit Battistelli, has been caught threatening an independent appeals board looking into the case of a judge he summarily dismissed.

In an extraordinary turn of events in Munich this week, a planned public hearing of the organization's "Enlarged Board of Appeal" was abandoned after it said it had received a "threatening letter" demanding that the hearing be held in private.

The board did not say who the letter was from or precisely what threats it contained, but several sources have confirmed it was sent by Battistelli, and in it he warned the appeal board that holding its hearing in public was "unlawful."

It is not known what Battistelli threatened to do if the board continued with its plan to hold the meeting in public, but under recent reform plans that his office has drawn up, the EPO president has introduced a range of measures that would effectively give him the right to hire and fire the president of the – supposedly independent – Board of Appeals.

According to those familiar with events, the appeal board responded to the letter by pointedly asking the chair of the EPO's Administrative Council whether he agreed with the letter's contents.

At the center of this political tussle lies the patent judge that Battistelli attempted to dismiss back in 2014 – something that was seen as threatening the entire organization's independence – as well as the suspension of two EPO staffers who had resisted reform efforts imposed by Battistelli.

It is not known why Battistelli is so insistent on the appeals board hearings being held in private, or why the appeals board is pushing for them to be held in public, but many suspect that what comes out in the course of the proceedings could be damaging to the president's standing.

Persistent efforts to force the organization to get rid of the patent judge and two EPO staffers and implement further reforms have led to a huge power struggle in which the president has awarded himself increasingly greater powers, leading us to dub him King Battistelli.

Those efforts have led to widespread rebukes from European politicians, the EPO's own Administrative Council, and EPO staff – which have given him a zero per cent approval rating and carried out repeated protests and strikes against the actions.

Despite being ordered to resolve the situation however, Battistelli has only grown more provocative, pushing for even greater movement of power within the organization to his office and dismissing claims that his current policies break German law by arguing that the EPO as an international organization is not beholden to any individual country's laws.

Earlier this week, his approach led to the extraordinary situation where his own Boards of Appeal publicly appealed for people to contact their country's representatives on the EPO's Administrative Council and ask them to reject the proposed changes. It also repeatedly criticized Battistelli in the strongest terms.

In response to this latest move, the EPO officially told us: "Please be informed that in the present case, the Administrative Council of the EPO is the competent appointing and disciplinary authority. Following the rules of the EPO, all disciplinary proceedings are confidential. This serves the purpose of protecting the integrity of the proceedings and of the parties involved." ®