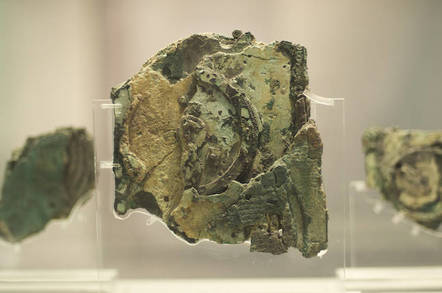 Scientists have examined hitherto-obscure inscriptions on the Antikythera Mechanism, a first century BC apparatus comprised of interlocking gears, and now believe the device could predict eclipses and the motion of the planets.

The Antikythera Mechanism is a scientific and archaeological marvel, because nothing else like it has ever been found. A few classical sources mention geared devices, but the Mechanism is the only one to survive from antiquity.

“Survive” may be too strong a word: the device was found on the sea bed near the Greek island of Antikythera after spending almost two millennia under water before its re-discovery in the year 1900. The machine has become crushed, its gears mashed together and some parts are missing.

In 1900 archaeologists saw the gears and obvious inscriptions and guessed the device was a mechanical calendar of some sorts. In recent years non-invasive imaging techniques have made it possible to peer inside the bronze artefact's innards, resulting in reconstructions that hinted the device was also a navigational tool.

Now boffins have given the device the most comprehensive going-over ever, imaging its surface and interior inscriptions with computed tomography (aka CT scans) and polynomial textual mapping (a technique HP Inc uses to peer inside objects).

The journal Almagest has now published an issue reporting those analyses. Among their findings is an interpretation of the text found on the Mechanism's cover, which is now felt to be “a systematic description of the dials, pointers, and other external features of the Mechanism, beginning with the front face and continuing with the rear face.”

“The best preserved passages include descriptions of features on lost parts of the Mechanism: a display of pointers bearing small spheres representing the Sun and planets on the front dial, and a dial on the upper back face representing a 76-year 'Kallippic' calendrical cycle.

In other words, a user manual.

The Mechanism's examiners are also now more confident that the device was built in Greece, rather than imported from Babylon, as analysis of the newly revealed texts suggests the machine's creators were familiar with Greek astronomy.

Because the Antikythera Mechanism is unique, efforts to find similar objects are ongoing. Last year we profiled submersible robot-wrangler Christian Lees, who worked on expeditions that visited the site where the Mechanism was found to search for similar devices. Similar efforts continue. ®

By the Rivers of Babylon, where the Antikythera Mechanism laid down

Boffins have new theory about origins of 'first computer'

Archaeologists and robots on hunt for more Antikythera pieces

How much of the world's oldest computer can they find?

What does it take to find the Antikythera Mechanism? Underwater robots, of course!

I worked on ... Meet the chap behind the controls