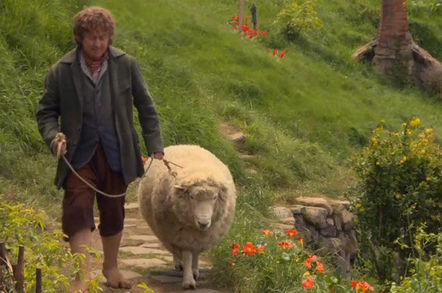 A new paper in the journal Nature suggests that a hobbit-sized relative of modern humans shrunk to their diminutive status as a result of being trapped on an island.

In 2003, archaeologists working on the Indonesian island of Flores found remains of a humanoid species that would have stood only 3.5 feet (1.06 meter) tall at maturity, and which had markedly reduced brain capacity. Dubbed homo floresiensis, the fossils are still being argued over, but new research seems to indicate that they are remains of an earlier primate, homo erectus.

Excavations at Mata Menge in the central part of Flores unearthed part of a jawbone and six teeth from two or three individuals who died around 700,000 years ago. Digital analysis showed them to be very similar to the teeth of homo erectus, and the tools found on the same site bear strong similarities to those used by the latter species.

Our erectus forebears were one of mankind's most successful ancestors. They first appeared around 1.9 million years ago and walked upright, used tools and fire, and spread throughout Africa, Europe, and Asia. They lasted until about 70,000 years ago and were thought to have been outcompeted by other hominid species.

The new fossils show a pretty clear link between erectus and floresiensis, but the Flores specimens had about half the height and brain capacity as their erectus cousins. So what caused this dwarfism?

The researchers think it was down to their environment, specifically a concept known as insular dwarfing. Several times in the past, species have become isolated on islands and shrunk to fit their limited range – the remains of dwarf elephant and mammoth have been found on Crete, Sardinia, and the Channel Islands off California.

"It would appear that the Flores hominins had acquired extremely small dentognathic size during the time span of at least 300 millennia following the initial colonization of Flores," the paper reads.

"This apparently very-fast transformation in hominin body size is surprising. Flores may have been an exceptional case; however, the fossil evidence from Mata Menge highlights how quickly major evolutionary changes could have occurred in hominin populations cut off on isolated and impoverished islands of Wallacea."

While the newly discovered fossils wouldn't have been as diminutive as later floresiensis fossils, they do indicate that the shrinkage from erectus was already well on its way. More excavations are needed, however, to win over those who still doubt that humanoid hobbits roamed the earth. ®