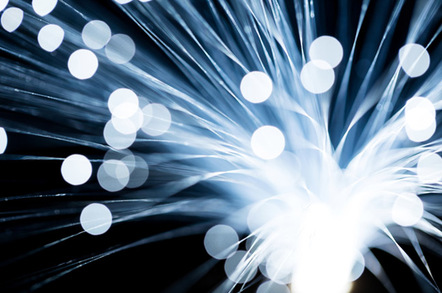 Speaking to El Reg recently, O’Reilly said dark fibre was a prerequisite for small cells and heterogeneous networks (HetNets) as well as being able to get access to the infrastructure where the smalls cells can be located. But in the UK, dark fibre is not widely available and local planning permission can be a lengthy process.

“We know that small cells work,” said O’Reilly. “Now it’s about how can I get access to the right infrastructure to deploy. And then you need to connect these small, independent, dynamic cells up, and the best way to do that is dark fibre.”

Dark fibre is essentially strands of optical fibre that are not in use. When operators or service providers lease unlit fibre, they install their own equipment to light it up and by doing so have more control over the costs and operation than if they bought a lit service.

O’Reilly noted that while there is some dark fibre available from the likes of CityFibre in London and other cities, there needs to be a bigger market in order to support HetNet deployments in the country.

“What we need to be able to do is open up that dark fibre market so that everyone can get the benefit of fibre access,” he said. “And from there, you can really drive customer experience. Once dark fibre is a viable product, that will drive the market. So one, we need a market, and then we need it to be financially viable.”

Operators deploy small cells indoors or outdoors to expand coverage and boost capacity, particularly in specific densely populated areas. They are also key to broader HetNet strategies, which are considered to be the foundations for future 5G networks. The lack of dark fibre access and lengthy local planning processes are practical challenges in the deployment of small cells today, but they could also impact the development of 5G networks in the future.

O’Reilly said he recently visited China, Japan and South Korea to learn how they are deploying small cells in preparation for 5G.

“They’re at the start of their 5G journey,” he said. “It’s interesting to see some of the lessons they’ve learned and to make sure that when we start down the path to 5G small cells, we take as many of the lessons that have been learned in other markets and apply them.”

“The interesting thing about China, Japan and South Korea is that they don’t have the same constraints as we do,” he said. “In Seoul, it takes about two to three months to get a base station live. Here, it can take us three years for the same thing. I like their numbers more than I like ours.”

Also, operators have access to dark fibre in these markets. And in the US, O’Reilly added, some cities have five or six dark fibre suppliers.

In the UK, it looks as though O’Reilly will eventually get his wish for more dark fibre, from at least one other supplier in particular. Last year, regulator Ofcom decided that BT should be required to provide access to its dark fibre. According to the new regulation, the UK incumbent is due to publish a draft product reference offer by September this year and is required to launch the dark fibre service by October 2017.

Dark fibre is, according to Ovum, more common across Europe with about half of the 28 EU countries having in place similar regulation requiring the incumbent provide dark fibre access.

“The regulation would help as a catalyst to get the market started,” said Catherine Haslam, senior analyst at Ovum. “In the UK, there is dark fibre available but it’s very localized and focused on the data centre market. More than any other telco service, dark fibre is heavily influenced by forces of supply and demand.”

According to Haslam, it’s a chicken-and-egg scenario: operators say there is not enough supply but suppliers want to know what the demand will be before they build networks. “Dark fibre suppliers need an understanding of when that demand is likely to hit,” she said.

Most providers, not just BT, prefer to sell a lit service because they can “add value” and build customer loyalty. “There hasn’t been huge demand for dark fibre,” Haslam said.

If O’Reilly’s comments are anything to go by, then some of that demand will come from mobile operators looking to beef up data capacity on their networks through the deployment of HetNets. ®