He denies any wrongdoing as team lawyers up 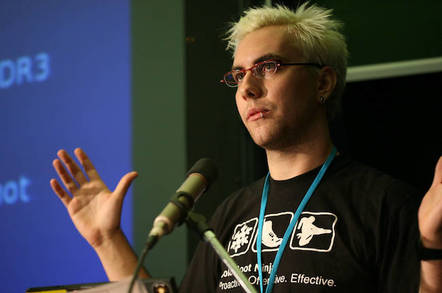 Turning to his PhD ... Jacob Appelbaum speaking at a conference (Pic: Simon Law)

Updated Jacob Appelbaum has left the Tor Project amid claims of "sexual misconduct" that he says are "unsubstantiated and unfounded."

Appelbaum, 33, a prominent hacker and privacy advocate, was a core developer of the anonymizing network software. His departure was announced in a terse statement just before the weekend:

Long time digital advocate, security researcher, and developer Jacob Appelbaum stepped down from his position at The Tor Project on May 25, 2016.

That was belatedly followed up with a more detailed explanation from Tor Project executive director Shari Steele, who acknowledged that serious allegations had been made against Appelbaum. She said the Tor Project is investigating claims about Appelbaum's workplace behaviour, and has engaged a law firm that specialises in employment law to consider the matter.

Berlin-based Appelbaum vigorously denies the allegations against him, warning he is prepared to use "legal channels, if necessary, to defend my reputation from these libelous accusations."

"I want to be clear: the accusations of criminal sexual misconduct against me are entirely false," he added.

Appelbaum, a US citizen who has analyzed and reported on Snowden and Wikileaks documents, said he has now turned his full attention to his PhD on cryptography at the Technical University of Eindhoven. ®