UCLA shooter: I killed my prof over code theft 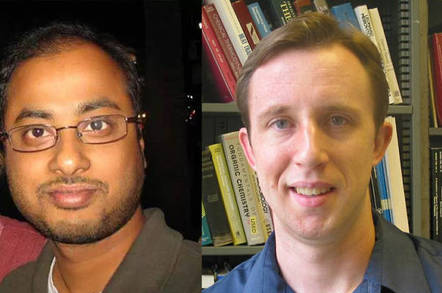 The student who shot and killed his engineering professor and then himself at a Los Angeles university had accused the professor of stealing his code.

In a blog post on March 10, Mainak Sarkar, 38, said Professor William Klug, 39, "is not the kind of person when you think of a professor. He is a very sick person. I urge every new student coming to UCLA to stay away from this guy."

He continued: "I was this guy's PhD student. We had personal differences. He cleverly stole all my code and gave it another student. He made me really sick. Your enemy is your enemy. But your friend can do a lot more harm. Be careful about whom you trust. Stay away from this sick guy." The post has since been taken down.

On Wednesday, nearly three months after posting it, and seemingly upset at poor grades, Sarkar drove from his home in Minnesota to Los Angeles where he confronted and gunned down Professor Klug at the university's engineering complex. Sarkar then turned the gun on himself and killed himself.

The Los Angeles Times quoted an unnamed UCLA source as saying the allegation that Klug stole his student's code was "absolutely untrue."

Just one day after the shooting, more details have emerged. According to the police, Sarkar had left a "kill list" at his home. One name on it was Professor Klug's and another a different UCLA professor, who is thought to have been unharmed. Police also discovered the body of a woman in Minnesota but have yet to release her identity. Her name was also on the list. Police did not say whether there were more names.

Sarkar left a suicide note at the scene of the UCLA shooting, the full details of which have not been made public, but the police did say it led them to his house in Minnesota after Sarkar asked whoever found the note to feed his kitten.

LAPD chief Charlie Beck said at a press conference that there was evidence of "mental issues" with respect to Sarkar, although he did not provide details. He also noted that Klug and colleagues said that Sarkar had exhibited odd behavior, but that they didn't view him as a threat.

Sarkar was one of a six-member research group researching computational biomechanics under Klug's supervision. In 2013, he had thanked Klug for acting as his mentor in his PhD dissertation.

Update: The woman found dead in Minnesota was Sarkar's wife.

Almost as good as a battery, says graphene-burning boffin

Are you coming to the party dressed as an IMP? ARPANET @ 50

The first two letters sent that day were 'L' and 'O' – what should the third have been?