Said something naughty in London? You could be cuffed 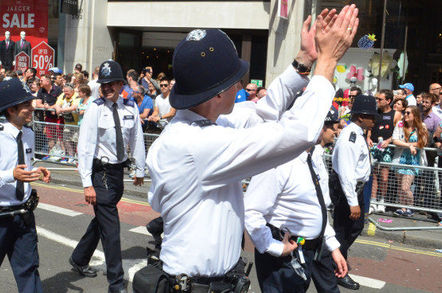 Two-and-a-half thousand Londoners have been arrested over the past five years for allegedly sending “offensive” messages via social media, statistics have revealed.

The full number of arrests made by the Metropolitan Police for alleged breaches of Section 127 of the Communications Act 2003 increased by 37 per cent over the last five years.

The statistics will fuel the debate over the limits of freedom of expression over social media networks such as Facebook and Twitter.

Although arrests for the alleged offences were slowly declining until 2013, they peaked again in 2015. Included in the 857 section 127 arrests made last year were 139 cuffings for sending, or causing to be sent, "a false message to cause annoyance, inconvenience or anxiety” – a 71 per cent increase over the number of arrests made for the same alleged offences in 2011.

A breach of section 127 is a criminal offence carrying a potential six month prison term or a fine of up to £5,000.

The figures were revealed (PDF) by the Metropolitan Police in response to a freedom of information request. They only apply to the London area, as policed by the Met, and do not cover charges or convictions secured under section 127.

Back in 2014 The Times revealed that prosecutions brought under section 127 had declined “dramatically” after new guidelines were published by the then-Director of Public Prosecutions. That came after more than 3,000 section 127 cases were heard in court during 2012.

Section 127 was the law used to convict Paul Chambers in the infamous Twitter Joke Trial of 2010. In January of that year, he joked on Twitter about blowing up Nottingham's Robin Hood Airport in frustration at flight delays. After a two-year legal fight he eventually managed to have his conviction overturned, with the help of a celebrity-backed campaign. ®