Take that, Mom! Turns out Super Mario Bros was all about solving complex math problems

Things only 80s kids will remember: Doing NP equations with a D-pad 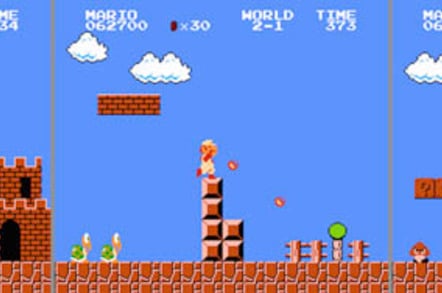 Completing a game of Super Mario Brothers is the mathematic equivalent of solving complex mathematical calculations, according to the Massachusetts Institute of Technology.

The prestigious tech university said in a recent study [PDF] that navigating the world's most famous plumber through a single level can require the same level of work as solving equations of the NP complexity level.

Released in 1983, Super Mario Brothers was bundled with retail versions of the Nintendo Entertainment System (NES), and is considered to be among the most popular video game franchises of all time. Top players have been able to complete the game through level 8-4 in under five minutes.

The researchers broke the task of completing a level in the Nintendo version of Super Mario Brothers down to a polynomial equation, factoring possible moves and the location of monsters on the level map. From there, they calculated the possibility of the player "solving" – or safely navigating – the level to the end.

"In this case, we prove that the game is solvable in polynomial time, assuming levels are explicitly encoded; on the other hand, if levels can be represented using run-length encoding, then the problem is weakly NP-hard (even if levels have only constant height, as in the video games)," wrote researchers Erik Demaine, Giovanni Viglietta and Aaron Williams.

They found that solving those equations based on the game levels meets NP complexity and, theoretically, levels for the game could be designed that would qualify as PSPACE complexity problems.

The paper notes that the commercial versions of the game don't carry levels of that complexity.

While the original NES games only contained levels designed by Nintendo, user-designed levels made with the Super Mario Maker tool have proven popular with players and have led to the creation of increasingly difficult levels. ®