Mellanox's SoCs take a night on the Tiles 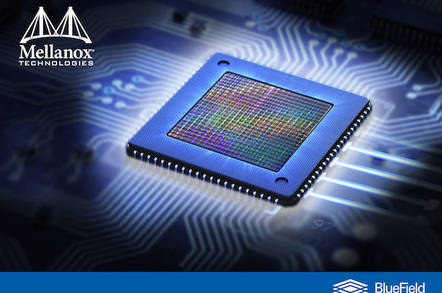 It's only a model: BlueField starts sampling Q1 2017

Fancy a high core count ARM system-on-a-chip? That's what Mellanox is packing into the BlueField SoC processors it hopes will give it the edge in the hyperscale market.

Bob Doud joined Mellanox in the latter's US$811 million acquisition of EzChip, whose Tilera multicore chip technology is a big part of the BlueField architecture. BlueField, he told The Register ahead of the launch, continues the Mellanox strategy of adding more sophisticated offloads with each new generation.

“The big guys, the Facebooks and Googles that have their software development teams, they know their workloads and pain points,” Doud said, and want their suppliers to “put cores on the adapters satisfying critical issues in the network”.

Giving the adapters better offload keeps them from continually “throwing more CPUs at the workload”, he said.

BlueField's networking-specific design characteristics include the data paths through the chips, its ability to handle small packets, low latency and low jitter are “all hard to achieve on a virtual workload on an x86”, Doud claims.

The target applications include dataplane offload in Network Function Virtualisation (NFV), networking and security, and as the embedded storage controller in Flash arrays.

A good example of its target in networking is handling encrypted tunnels: rather than just passing everything through to the CPU, the tunnel can terminate on the adapter, which then drops the traffic onto PCI or into the host's memory, he said.

In storage applications, Doud says the industry is at “an interesting nexus with the arrival of Flash, scale-out architectures, and NVME.

“A single NVME drive needs 20 Gbps of bandwidth to service it,” he said; the aim with BlueField is to let big users scale a bunch of NVME drives with Infiniband or Ethernet.

“Bluefield would serve as a storage controller, with 25/50/100; and it's got a lot of PCI southbound talking to the drives.”

Where Tilera comes in

The necessary performance rests on packing lots of cores onto one chip. That's where the Tilera Tile Mesh architecture comes in, providing the on-chip interconnect.

The two-dimensional mesh is scalable, and pre-acquisition, EzChip had announced a 100-core ARM chip.

“We are at the pointy end of getting a lot of cores on the chip, and we were able to show consistently that not just had a lot of cores, but also performance that scaled to 98 per cent of linear as you added cores,” he said.

“Coherency is hard to do: we developed a scalable cache coherency arch that we can take to hundreds of cores,” he said.

Linux 5.0 is out except it's really 4.21 because Linus 'ran out of fingers and toes' to count on

Ohhh, Torvalds! You are a card!

.NET Core 3 Preview 3 takes a bow, but best not hold your breath for the final release