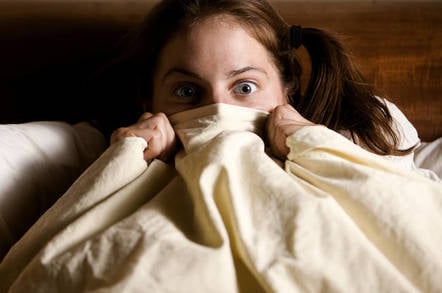 When your computer goes bump in the night ... Photo source: Shutterstock

Hands-on In its most recent quarterly earnings report, Microsoft highlighted its increasingly popular Surface line as the growth leader in its More Personal Computing line of business. Surface led the category with 61 per cent growth in constant currency, a rise driven by the top products in the line, the Surface Pro 4 tablet and the Surface Book detachable-tablet laptop.

Despite its popularity, the future of Surface — particularly the Surface Pro 4 and the Surface Book — may depend on Microsoft’s ability to address a reliability issue now known colloquially by an alarming number of users as “Sleep of Death.”

I purchased a top-of-the-line Windows 10 Surface Book in February. With an Intel Core i7-6600U dual-core processor and 1TB of flash storage, it wasn’t cheap. The system had a base price of $3,199; configured with Office 365, a Surface Dock, and Microsoft Complete Accident Protection, I spent a bit over $4,000 (including tax). That may be a hefty price tag for a laptop, but I prefer to max out an initial configuration — not because I’m a power user or advanced gamer, but in hopes of prolonging my system’s lifespan and delaying the always painful process of migrating to a new system.

The Surface Book was pleasing to use right out of the box. It balances the delicate tradeoff of having a bright, high-resolution (3,000 x 2,000-pixel) screen, driven by an Nvidia GeForce GPU, while still being lightweight (3.34 pounds, with keyboard) and sporting a long battery life. The screen detaches to become a nifty tablet — this feature usually works — though with less battery power, since one of the two batteries is in the keyboard attachment. 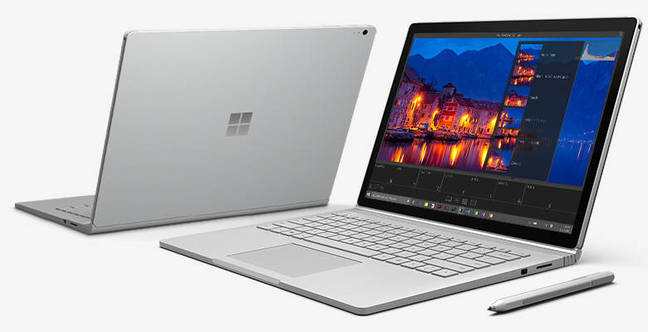 I found I use the touch screen only in the rare times I’m in tablet mode, though overall it’s a plus. The system comes with a stylus with clickable tip and pads. Maybe if I were an artist or spent a lot of time in tablet mode I’d use it, but after trying it a few times, the stylus became part of the detritus of pens, thumb drives, and mints in the bottom of my laptop bag. The Windows Hello facial recognition for sign-in is neat, but it doesn’t recognize me about 10 per cent of the time. It did unlock immediately for my friend Peggy, who must look enough like me.

From a performance perspective it’s a good laptop, and one that I would have been happy using for my small business. It’s when I’m not using it that the big problem sets in.

Whenever the system goes to sleep for a few hours or more, chances are it’s not going to wake up. These long sleep periods, such as overnight, usually result in system crashes. The start of my work day, almost every day, involves bringing my Surface Book back from an unplanned full shutdown. If I attend a few meetings then come back, it might be dead. Catch a flight to the East Coast? The laptop won’t make it.

In the three months I’ve been trying to solve this problem, I’ve found it’s so common it has a name. Sleep of Death has plagued Surface users, particularly on Surface Pro 4 and Surface Book, since early this year. Searching “sleep of death Surface” on reddit.com brings up 50 relevant threads. Even more damning, the same search on Microsoft’s own support forums yields over 75,000 results; for users who don’t know the bug’s nickname, a simpler search like “Surface sleep crash” nets even more: 250,000.

Sleep of Death is just what it sounds like. You leave your computer in sleep mode. When you come back, it’s shut down, and needs to be powered back up, leaving you to sift through auto-saved versions of files, hoping to avoid data corruption. This can happen whether in tablet or laptop mode, on battery power or plugged in (including docked), with or without hibernation enabled. Even if the system is set never to hibernate, long sleep is usually fatal. 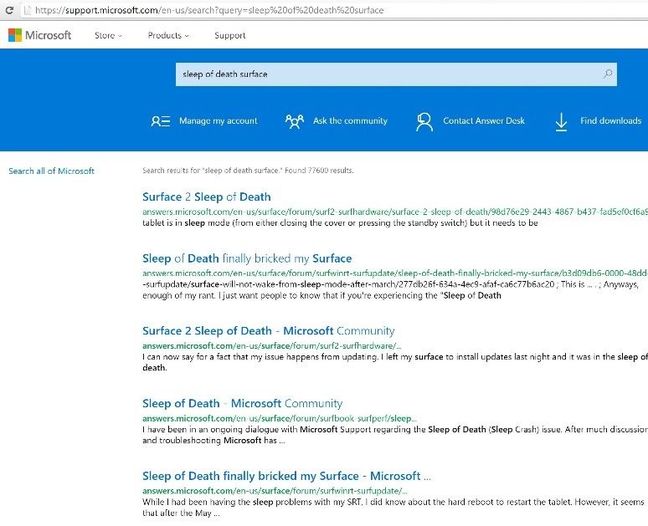 Outcry ... A search on Microsoft’s support forum for “sleep of death Surface” gets over 75,000 hits

In some cases, the shutdown is worse. (“Crash” is technically the wrong word, as there is no crash dump file; it is an unplanned shutdown.) The system may end up unresponsive to the power button. This has happened to me about twice per month, leaving me to follow online instructions from Microsoft (read from my iPhone, naturally) on what to do when your “Surface won’t turn on or wake from sleep.” In the worst scenarios, my Surface Book has overheated while allegedly sleeping inside my laptop bag. This tends to happen if I close it and put it away without giving a specific sleep command.

From my experience, the best chance to avoid a crash is to close applications before allowing the Surface Book to sleep. The fewer things I leave open, the better the chance it will sleep peacefully through the night or my flight. (Despite these precautions, the longer the sleep, the more likely a crash is.) But if I’m going to close everything, I might as well shut it down. The whole point of a sleep function is to leave your work open on your computer or tablet and then have it be in the same state when you come back.

Next page: Microsoft asleep at the wheel
Page:
Tips and corrections
239 Comments