Things go from bad to worse for EPO's Benoit Battistelli 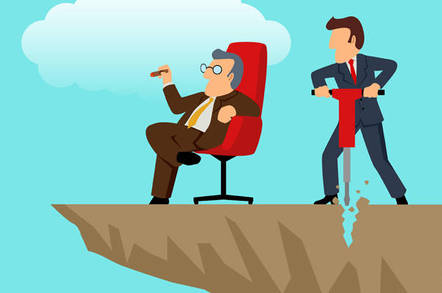 No love lost between EPO president and his staff. Pic: Shutterstock

Exclusive Every CEO knows it's impossible to be universally liked. But when staff start cutting your brakes, maybe it's time to consider moving on.

The president of the European Patent Office (EPO), Benoit Battistelli, has already been on the receiving end of an official censure from his board, a series of strikes, several highly critical news reports, and a zero per cent confidence rating. But an announcement sent to all staff on Wednesday topped the lot.

"Deliberate damage to personal property of the President," read the subject line in an email sent from EPO vice president Željko Topić and seen by The Register.

"I would like to draw your attention to an incident which happened at some time yesterday in the non-public underground parking area of the Isar Building.

"The bicycle belonging to President Battistelli was damaged to an extent that even the brakes were tampered with. This was without doubt a deliberate act of vandalism."

That's right, such is the animosity toward Battistelli – who set up a special investigative unit to spy on his staff, suspended union officials, docked people's pensions, restricted sick leave and disregarded staff suicides as having nothing to do with restrictive new policies he introduced that are actually illegal – that the staff has seemingly taken to smashing up his bike and cutting his brakes.

Topić's email continues: "I strongly deplore this utterly unacceptable act and trust that you, the staff of the European Patent Office, join me in condemning the behaviour of the person or persons who committed this offence. I remind staff of their duty to behave at all times in the manner expected of an international civil servant."

That's not all. According to reports, the EPO has recently hired no fewer than six bodyguards to provide "close protection" of Battistelli for six months for the princely sum of €550,000 ($615,000).

The irony of the EPO paying hundreds of thousands of euros to protect Battistelli from his own staff while cutting the salaries and benefits of staff representatives that stood up to his reorganization plans has not been lost on people.

Incredibly, however, despite an ever-increasing outcry against Battistelli and his executive team and several meetings of the EPO's Administrative Council focused solely on how to overcome the breakdown in staff-management communication, Battistelli is still refusing to budge an inch.

Despite being told to fix the situation and scale back the problems in March, Battistelli has instead proposed reforms that have angered staff even more. They are now planning yet more protests to take place during the organization's annual PR showpiece, the EPO European Inventor Award in June.

The EPO and its employment conditions will also be the subject of a formal discussion in the Bavarian Parliament. The EPO is headquartered in Munich but its employee policies break local law. EPO management has responded by claiming it is an international organization and so is not subject to local laws.

Unsurprisingly, this approach has added local legislators to the long list of people who would be unlikely to run to the aid of Mr Battistelli if he ran into a tree on account of his bike brakes failing. ®