I can stream for miles and miles… 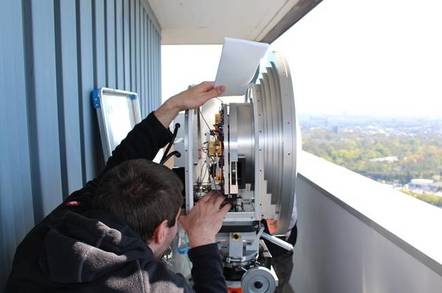 E's are good ... One of the E-band transmitters with parabolic antenna

A team of German scientists has managed to establish a 6Gbps wireless link over a distance of 37 kilometers using newly developed antennas and receivers.

The Advanced E Band Satellite Link Studies team established a connection between a base station and the town of Wachtberg using hardware with monolithically integrated millimeter wave circuits.

These used gallium-nitride semiconductors to boost transmission power output up to 1W and sent out the signal using a parabolic antenna. The receivers used custom high-speed transistors – consisting of indium-gallium-arsenide-semiconductor layers with very high electron mobility – which can pick up weak wireless signals.

Using the 71 to 76GHz frequency range, the team hit a peak of 6Gbps data transfer rates – enough to transmit a DVD in around 10 seconds. The equipment can also be used to provide 24Mbit/s to 250 separate internet connections.

"The transmission of high quantities of data by radio over large distances serves a high number of important application areas: the next generation of satellite communication requires an ever-increasing data offload from earth observation satellites down to earth," said Fraunhofer Institute for Applied Solid State Physics.

"Terrestrial radio transmissions in E-band are suitable as a cost-effective replacement for deployment of optical fiber or as ad-hoc networks in the case of crises and catastrophe, and for connecting base stations in the backhaul of mobile communication systems." ®