US 5th graders have a pop at paper plane record 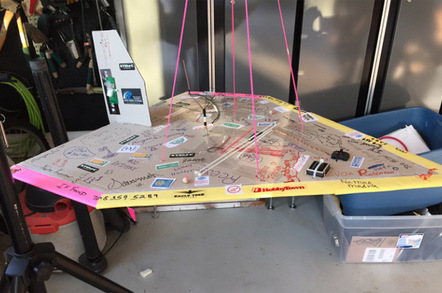 A bunch of US 5th graders* yesterday came close to breaking the Guinness World Record for the highest-altitude paper plane launch, which currently stands at a dizzying 35,043m.

The record will, then, remain in Blighty until a team with the Right Stuff snatches the crown from the Science Club of Ipswich's Kesgrave High School. Last year, the Brit schoolkids led by teacher David Green finally topped our own 2010 Paper Aircraft Released Into Space (PARIS) flight, which saw the Vulture 1 aircraft establish the record at 27,310m.

Other pretenders had attempted to surpass that lofty altitude, without success. In 2012, the University of Southern Indiana had two goes with the Geronimo aircraft, and were thwarted first by premature balloon burst, and then by the disintegration of Geronimo at 32,612m.

In 2014, a group of cadets from Fox Valley Composite Squadron of the Illinois Wing, Civil Air Patrol successfully dropped a paper dart from 29,430m at the third attempt, but were apparently unable to provide Guinness World Records with the necessary video footage of the achievement.

We're pleased that our PARIS mission has inspired so much paper-based tomfoolery, and look forward to further attempts to push the envelope. ®

* Equivalent to year 6 in the UK