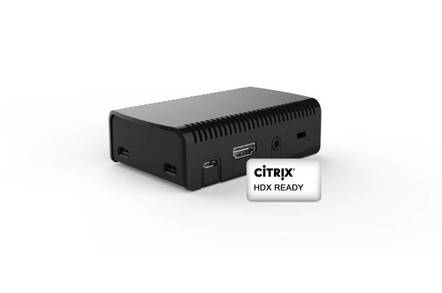 Citrix has unveiled a desktop thin client based on the Raspberry Pi microcomputer.

The HDX Ready Pi is a Citrix-built box containing the Raspberry Pi 3 hardware and a ViewSonic Linux build designed specifically to run with the Citrix HDX virtual desktop platform.

In addition to the Raspberry Pi 3 board, the client boxes contain a power supply and ports for the Pi's HDMI, ethernet and USB connections.

The $89 Pi boxes would replace a traditional thin client setup with what Citrix says is a lower cost and more power-efficient option. The boxes connect to a XenDesktop and XenApp server that hosts the virtual instances of each individual PC.

"In classic disruptive fashion, the Raspberry Pi has already taken a significant share of the education PC market with over 8 million devices shipped," Citrix VP of emerging solutions Chris Fleck said in announcing the new boxes.

"With the Citrix-optimized HDX Ready Pi, we expect many other industries to adopt the platform, now that the 'do it yourself' barrier is demolished."

Citrix has been toying with the Pi as a virtualization client for some time now, working on client software that could be downloaded and installed on off-the-shelf Pi units.

With the HDX boxes, Citrix is taking the project a step further by offering a pre-built box (manufactured by ViewSonic or Micro Center) that is ready out-of-the box to be plugged in a thin client.

Citrix said that it hopes to aim the Pi boxes not only at customers refreshing their existing virtual desktop hardware, but also at companies caught up in the Windows 10 upgrade drama and looking at alternatives to a PC hardware refresh.

"Most organizations are planning Windows 10 migrations; Citrix has optimized Receiver on the HDX Ready Pi and XenApp/XenDesktop to provide a true PC-like experience, and Raspberry Pi has achieved a breakthrough in hardware price/performance," Fleck said.

"We have many early adopter customers already piloting or using the Raspberry Pi with Citrix."

Companies who want to try the Pi boxes will have to wait a few weeks. Citrix said it is now taking pre-orders, with hardware due to ship next month. ®