Don't get excited about shorter passenger flights just yet, but do celebrate a successful test 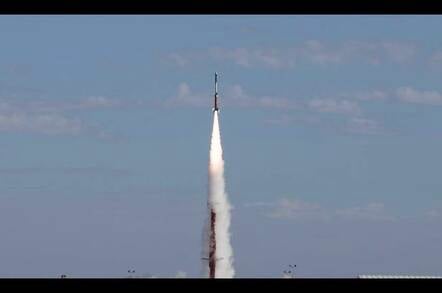 The S-30 / Orion hybrid carrying the HiFiRE 5B experiment

The data-gathering experiment wasn't testing a hypersonic motor – sorry “Sydney to London in two hours” fans – but rather carried instruments to observe the aerodynamics of flight at speeds up to 9,200 km/h.

The HiFiRE 5B experiment was conducted to measure boundary layer transition on a three-dimensional body reaching hypersonic speeds. It was a repeat of the HiFiRE 5 launch in April 2012, which only reached Mach 3 after the second-stage rocket failed.

HiFiRE is a joint project between Australia's Defence Science and Technology Organisation, the US Air Force Research Laboratory, Boeing, and the University of Queensland.

The success of HiFiRE will be a morale-booster for the University after the failure of its 2013, AU$14 million ScramSpace launch in Norway.

As this design document (PDF) on NASA's site explains, the experimental part of last week's shot was the payload carrying an instrument package.

The rocket itself was an S-30 sounding rocket first stage and an “Improved Orion” second stage. ®

RoTM Unarmed, but let's be real – it's only a matter of time, isn't it?