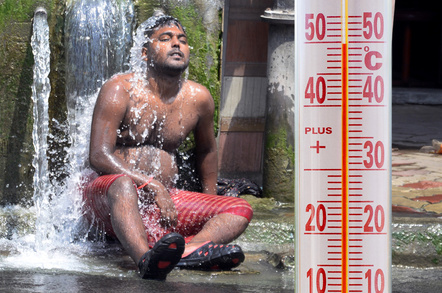 Those readers with a tendency to wilt with rising temperatures are advised to steer clear of the Indian state of Rajasthan, where the mercury yesterday hit a blistering 51°C.

The city of Phalodi broke India's previous record of 50.6°C, registered in 1956, during a heatwave which has seen the country's north and west suffer weeks of temperatures above 40°C. India's Meteorological Department warns things aren't expected to be any less infernal today, but forecasts some relief over the weekend and going into next week.

The Indian definition of a "heatwave" is a maximum of 45°C, or "five degrees higher than the average for the area in previous years", as the BBC puts it.

Blighty similarly uses the "five degrees" standard for declaring a heatwave, specifically the World Meteorological Organization's determination that it's "when the daily maximum temperature of more than five consecutive days exceeds the average maximum temperature by 5°C, the normal period being 1961-1990".

The British press will, of course, trumpet a absolute sizzler if thermometers register anything over 25°C for a single weekend of unbroken sunshine. The papers must have exhausted an entire year's worth of phew scorcher headlines when the UK record high of 38.5°C was recorded on 10 August 2003 in Faversham, Kent.

Back in India, relief from the heat is expected when the annual monsoon hits. The cooling rains generally arrive in mid-June. ®