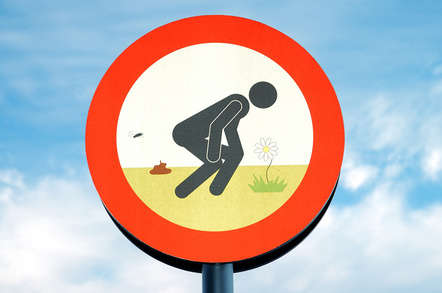 An Arizona TV journalist on assignment covering the alleged sacrifice and smoking of a family poodle was arrested earlier this week for allegedly dropping his pants and dumping a load in public.

According to the Phoenix New Times, CBS 5's Jonathan Lowe is alleged to have been caught short in the Phoenix suburb of Goodyear, whereupon he simply exited his news van and allegedly emptied his bowels in someone's garden.

The report states that a witness saw Lowe "walk around and pick up several papers from the street". He then "proceeded to defecate in the yard of the residence".

The report continues that when confronted by an officer, Lowe said: "I know what you want to talk to me about. I've been feeling very sick and I've been stuck in this van all day. So, I went over to that person's yard and took care of business."

Lowe has been charged under the Goodyear code violation of "public urination or defecation", punishable by "a fine of up to $2,500 or six months in jail".

His future at CBS 5 is uncertain, although his bio page has been wiped clean. If Lowe has been flushed, then his last assignment concerned the bizarre case of the former Arizona State University football player who, according to court documents, "burned a shirt that belonged to his 17-year-old daughter in the industrial-size smoker in a trailer in his side yard, saying he didn't like the shirt because he believed it had to do with the devil", then declared "in front of his wife and four children that he had to make a sacrifice of a male, either himself, his 6-year-old son or the family dog".

According to court documents, he told officers that he chose the dog, broke its neck, and police later discovered the poor poodle "dead in the smoker". ®

Like frozen burgers, 'Bigfoot' DNA samples have a touch of horse

Astronauts sequence DNA in space for the first time