Chaps make working 6502 CPU by hand. Because why not? 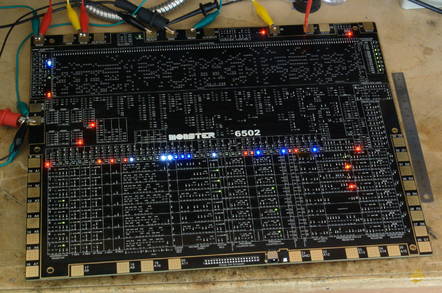 The MOnSter 6502: a microprocessor the hard way

The 6502 CPU is a fondly-remembered CPU* for good reason: along with chips from Motorola, Intel and Zilog, it helped create the personal computer business in the 1980s.

However, this project is affection on a grand scale: some US enthusiasts are creating a transistor-for-transistor replica of the chip's design using discrete components.

It's a good thing we're in the era of surface mount components, because even with small components the 3,218 transistors, 1,019 resistors and various other bits of the MOnSter 6502 need a four-layer PCB measuring 12” x 15” with components mounted on both sides.

Because a big, slow, and mostly-useless processor board would be boring without flashing lights, it also includes 167 LEDs showing the values of “various control lines, registers, and status bits”.

Why do it? You could take a hint from the interests of one of the designers, Eric Schlaepfer, a vacuum tube enthusiast. He worked with Windell Oskay of Evil Mad Scientist Laboratories to design the MOnSter 6502.

Schlaepfer writes that other 6502 enthusiasts had already done the hardest work of reverse-engineering the innards of the chip:

“The hard work of reverse engineering the actual 6502 has already been done by the folks at Visual6502.org. I was able to extract the netlist from their Javascript simulation, which contains a list of all the transistors and every single wire connecting them together”.

Regrettably, the chip won't be able to completely emulate the original 6502 inside an olde-worlde Apple board, because it's too slow.

The huge amount of capacitance on the board means its clock will probably max out between tens and hundreds of kilohertz. That might be enough, however, to get it to boot and run BASIC, Schlaepfer hopes.®

*Schlaepfer and Oskay like their disaggregated chips. They've also recreated discrete-component versions of two smaller classics: the 555 timer, and the 741 op-amp.