GCHQ's Twitter move: Wants to be 'accessible', people to 'understand' 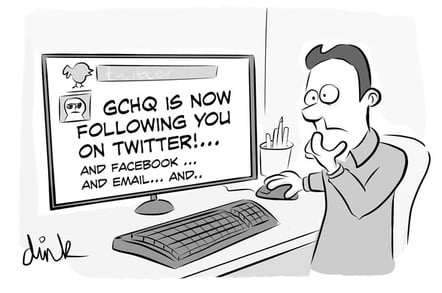 The UK government spy agency’s first message to the global micro-blogging platform on Monday morning was the brief “Hello, world”, something that GCHQ probably hopes will resonate with computer programmers worldwide.1

Simple and in keeping with the banal first entries of many Twitter users. @GCHQ should fit right in amongst the micro-blogging throng.

More challenging content from the profile is promised in future.

In a statement, GCHQ promised to take more about its history, cryptography and more including upcoming puzzles and corporate news.

We will be tweeting about our history, mission outcomes, languages, maths, cyber security, technology and innovation, information about GCHQ in general, job opportunities and yes, there will be puzzles! We will also be using it as a way of signposting events, publications, news, blogs and opinion pieces.

GCHQ added that joining Twitter was a sign it wanted to be more open about its work in helping to keep Britain safe. Open, up to a point, El Reg’s security desk predicts.

“We want GCHQ to be more accessible and to help the public understand more about our work,” it said. “We also want to reach out to the technical community and add our voice to social media conversations about technology, maths, cyber security and other topics where we have a view.”

So far @GCHQ has pulled in 2,500 followers. A bit unbalanced since GCHQ already follows everybody on Twitter, as part of its mission.

Still it’s early days for the newborn Twitter feed. Those not yet following GCHQ yet include Edward Snowden, who only follows the @NSA Twitter feed.

1 For those learning to program, getting "Hello, world" to appear on a screen is a gentle introduction to coding because you can see the output of your code represented visually on the screen.