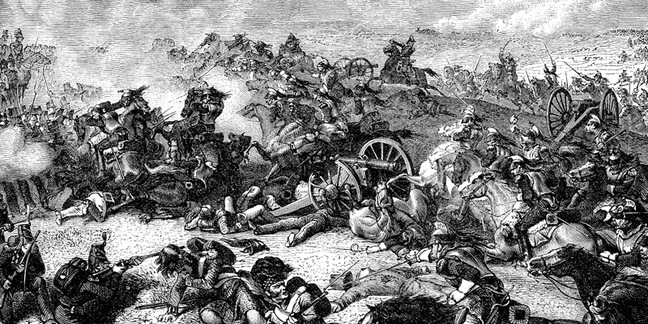 In what promises to be an entertaining night, politically at least, Russia, Ukraine and Georgia will face off in Saturday's Eurovision Song Contest final in Stockholm.

Yesterday's second semifinal saw Ukraine's Jamala's cheerful ditty 1944 safely through to challenge Russkie crooner Sergey Lazarev and You Are The Only One for European pop supremacy. Lazarev qualified for the final in the first semi on Tuesday.

1944 is about Stalin's forced relocation of Crimean Tatars, and lest there be any doubt about the underlying message, Eurovision 2004 winner Rouslana clarified: "This song is precisely what we are all suffering in Ukraine today."

That Ukraine dodged censure under Eurovision rules prohibiting "lyrics, speeches, gestures of a political or similar nature" has raised a few eyebrows. Georgia's 2009 entry We Don't Wanna Put In fell foul of this restriction, and the country withdrew from the competition after declining a the European Broadcasting Union (EBU) invitation to revise the lyrics, or submit a new entry.

Georgia's 2016 contender - Midnight Gold, performed by Nika Kocharov and Young Georgian Lolitaz - appears to contain no references whatsoever to South Ossetia or the Kremlin, and was in truth a pretty plausible highlight amid the formula pop on offer yesterday.

Sadly, plausible is not a word which can be used to describe Dona by Kaliopi of Macedonia (a member of the ensemble "The Countries Formerly Known As Yugoslavia"). Macedonia is notable for two exports - Alexander and opium, renowned for elevated levels of greatness and morphine, respectively - and I can only say a quick hit of the latter would have been a mercy for viewers as Kaliopi warbled her way out of Eurovision.

The Eurovision fans among you will have noticed the shock absence of seven-time winner Ireland. Former Westlife member Nicky Byrne failed to make the cut last night with Sunlight.

Blighty, as an automatic qualifier, was spared the semifinal ordeal, and will be represented by fresh-faced Joe and Jake, who'll be claiming You're Not Alone:

I don't think I'm alone in thinking the UK and its magnificent musical heritage would be better represented by this slightly less anodyne duo (absolutely NSFW). ®

Eurovision 2016 will feature a new voting system. The organisers explain: "In previous years the results of the professional juries and viewers have been presented as a combined result, each accounting for 50 percent of the final score.

"From 2016, the professional juries and televoters from each country will each award a separate set of points from 1 to 8, 10 and 12. This now means the top 10 countries in both the jury and televote will receive points, adding a new level of excitement for hundreds of millions of viewers in Europe and beyond."