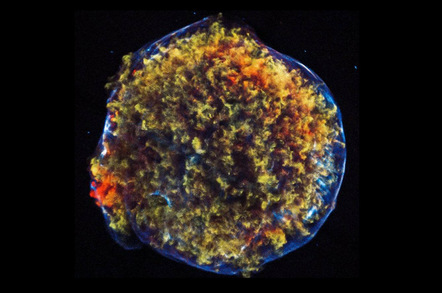 Astronomers have produced a fetching animation of the inexorable outwards expansion of the remains of the Tycho Type Ia supernova - a white dwarf in a binary star system which went bang in spectacular fashion back in 1572.

The explosion was so bright it was visible from Earth during the day, even at a distance of some 10,000 light years. Danish astronomer Tycho Brahe was on hand to observe the event which bears his name.

The sequence comprises a series of images grabbed between 2000 and 2015 by the Chandra X-ray Observatory. NASA explains: "The supersonic expansion of the exploded star produced a shock wave moving outward into the surrounding interstellar gas, and another, reverse shock wave moving back into the expanding stellar debris.

"The outer shock has produced a rapidly moving shell of extremely high-energy electrons (blue), and the reverse shock has heated the expanding debris to millions of degrees (red and green)."

While the white dwarf's scattered remains may seem to be expanding at a fairly leisurely pace, NASA notes that the maximum speed of the blast wave is around 19,000,000 km/h (roughly 12,000,000 mph).

However, the expansion is not even. The space agency says: "Although the remnant is approximately circular, there are clear differences in the speed of the blast wave in different regions. The speed in the right and lower right directions is about twice as large as that in the left and the upper left directions.

"This range in speed of the blast wave's outward motion is caused by differences in the density of gas surrounding the supernova remnant. This causes an offset in position of the explosion site from the geometric center, determined by locating the center of the circular remnant. The astronomers found that the size of the offset is about 10% of the remnant's current radius, towards the upper left of the geometric center."

A Type Ia supernova is triggered in one of two ways: either the white dwarf pulls material from its companion star until it reaches critical mass at around 1.4 solar masses; or two white dwarfs merge "causing the critical mass to be exceeded".

Knowing just where the explosion centre lies is important for scientists to determine just which of these scenarios is the case, because it "narrows the search region for a surviving companion star", or indeed the search region for nothing at all, in the case of a mutually-destructive white dwarf pair.

The full findings of the astronomers' supernova-gazing, including those from additional radio observations by the Karl G. Jansky Very Large Array, can be found here. ®