Seagate ready for the HAMR blow: First drives out in 2017 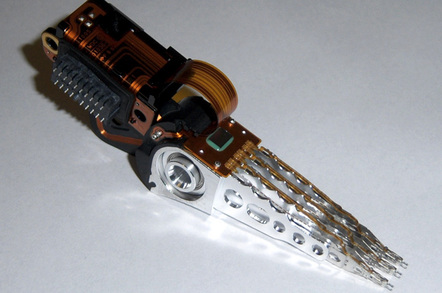 PMR was a development from the previous longitudinal magnetic recording technology, in which the magnetised domains in the disk platter's recording medium were laid out flat on the platter's surface. In a quest to increase the capacity of the drives by decreasing the surface area of the recording domain the domains were flipped upright and stored vertically, perpendicular to the recording medium's surface, so that only their tips were visible, as it were, on that surface.

That meant substantial change to the read-write heads, which had to write in a narrower circle but more deeply, and the read heads which now had a much smaller surface area of magnetised grains in a bit's domain to read. PMR technology has progressed through several generations, with each generation decreasing the surface area of the bit more and more.

Only the next PMR step is soon going to be a dead end.

There will be so few grains in a shrunken PMR bit that their stability will suffer and they will experience random bit value changes because of the influence of neighbouring bits and random events. If we want higher capacity disk drives in a standard-sized 3.5-inch or 2.5-inch disk drive enclosure then some other technology will have to be used.

Hopefully HAMR can provide areal density of between 1.2 and 5 terabits per square inch, with initial product integration slated for 2016. That is a large increase from PMR. Development of HAMR is costly and complex and Seagate's Northern Ireland operation is deeply involved in it.

The company first set up manufacturing in Ireland in 1992, and had two plants, one at Springtown, Londonderry, and a disk drive platter substrate plant at Limavady. It closed a the Limavady plant in October 2007, after 10 years of operation, 927 employees were made redundant.

Springtown is a semi-conductor wafer manufacturing plant in Springtown, Londonderry, and employs some 1,400 people. The wafers have thin-film, disk read-write head chips deposited on them in the manufacturing process, and these are shipped to other Seagate plants around the world, to make finished disk drives.

Springtown's output, assuming constant operation, would be around 400 million heads, meaning it is not Seagate's only read-write manufacturing plant, but one of two.

In September last year Seagate laid off 14 Springtown employees in a cost-reduction exercise that meant two per cent of its global workforce had to be made redundant.

Recently, in the face of falling disk drive unit sales, Seagate has decided to reduce its drive manufacturing capacity. Chairman and CEO Steve Luczo said; "The company is in the process of prioritising our strategic positioning, manufacturing footprint and operating expense investments to achieve the appropriate level of normalised earnings. We anticipate that these actions will be implemented over the next several quarters.”

According to Stifel MD Aaron Rakers, Seagate will reduce its HDD manufacturing capacity footprint by 35 per cent, saving approximately $20m per quarter. It is currently making 40 million disk drives a quarter, say 200 million a year, meaning, at a 3-platter/drive average 600 million read-write heads are needed.

It peaked at 66 million drives/quarter or c240 million/year in early 2014, which would have required roughly 720 million read-write heads.

Taking out 35 per cent of its current manufacturing capacity from that level would imply downsizing to a maximum of 170 million drives/year, say 510 million read-write heads, still assuming a 3:1 platter/drive ratio. So some 210 million fewer read-write heads would be needed.

Seagate is still going through its manufacturing planning, but a starting assumption could be that Springtown will bear half the burden and need to produce, say, 300 million heads a year instead of 400 million. This is only guesswork, of course.

The company hopes though, that the annual market for hard disk drives will reach around one billion units by 2020. That's 250 million a quarter. With Seagate having currently a 40 per cent share of the disk drive market, that means, pro-rata, 100 million drives/quarter, a large jump from the current 40 million/quarter it makes. Seagate expects (prays?) that the digital world's unceasing and growing need for data storage will propel its manufacturing out to this level.

Seagate has started introducing helium drives, which, because of the lower platter friction through spinning through helium instead of air, can have less strong and thinner platters, indeed more platters, with up to 7 in the space previously occupied by 4 or 5 in a 3.5-inch drive.

That increases the read-write head requirement. Seagate intends to move all its enterprise drives to helium technology, so the average platter count could increase to 5 meaning that it would then need some 850 million read-write heads/year. On that basis Springtown will need to produce more heads, not less.

SMR is a stop gap recording technology, in that write tracks are partially overlapped so that, overall, more tracks can be laid down on the drive, with the read head able to read the narrower and un-overlapped portion of the track. In effect reads can be made smaller but write heads cannot. A downside is that if data has to be rewritten then blocks of tracks have to be reconstructed, which takes time, which lengthens disk write performance.

It would be much better if the write track could be made smaller to match the read track, and that can only be done with the developing recording technology, HAMR. In this technology a new and more stable recording medium is used, one in which, at room temperatures, bits are far less susceptible to value-shifting effects caused by neighbouring bits. The medium has a higher coercivity.

In order to write a bit, and overcome this coercivity, the recording medium has to be heated in the area of the bit, using a laser, then the bit written by causing a magnetic change, and then the next bit written as the platter spins under the head.

To get the areal density benefits the read-write heads have to work on smaller bit areas as well.

This implies, amongst other things, phenomenally accurate positioning and timing of the heating laser beam as well as extraordinarily tight control of the recording medium so that heating effects are tightly localised and cooling is efficient. So we have extensive read-write head technology development required as well as platter recording medium chemistry and physics being worked on.

It is a huge research and development effort involving a lot of science, some of which is taking place in Northern Ireland.

The research involves collaboration with Ansin, a Seagate and Queens University, Belfast, organisation that carries out materials research and development, and has a set of optical analysis equipment. The HAMR research effort will involve visible-range semiconductor lasers.

Some 180 staff at Seagate Springtown are working on this HAMR project.

We expect that the first HAMR drives will appear in 2017, and have 14-16TB capacities, with 20TB in prospect. Competing flash drives, using 3D TLC (3bits/cell) NAND, are slated to reach 15TB that year and it would be good for Seagate if disks retained a capacity edge.

If Seagate extrapolations of disk drive demand to a billion units in 2020 are correct then its Springtown facility will be vital – its HAMR heads reading and writing the data on Seagate’s portion of that billion. ®