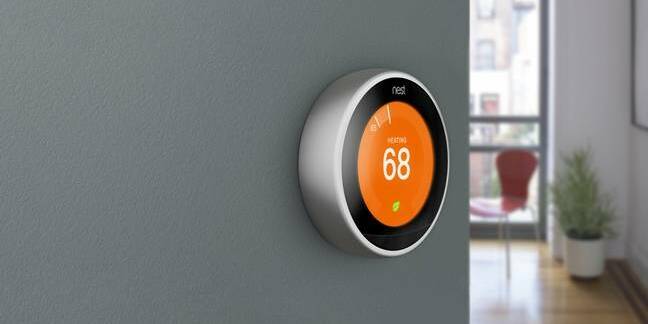 Google has open-sourced the Thread networking protocol used in its Nest smart thermostat in an effort to win the ongoing internet of things standards war.

OpenThread was posted on GitHub Wednesday under a BSD license and is free to anyone who wants to build the low-power mesh networking standard into smart-home products. However, any products will still need to be certified by the Thread Group and manufacturers will need to sign up as members.

The decision comes one week before Google's I/O conference, raising the likelihood that the Chocolate Factory will use the event to push IoT-related announcements. Notably, the open sourcing of its product has yet to appear on the Thread Group's website.

The head of the Nest platform, Greg Hu, said: "OpenThread will significantly accelerate the deployment of Thread in these devices, establishing Thread as one of the key networking technology standards for connected products in the home." He highlighted the fact that Thread is built on open standards, is an IPv6 protocol and will work with existing 802.15.4 wireless devices.

However, the decision to go open source is belated in many respects. Google's rivals in the IoT space - the Allseen Alliance and the Open Connectivity Foundation (OCF) - have already open sourced their protocols and have been slowly picking up users as more IoT products come to market.

In Google/Thread's corner are chipmakers ARM, Qualcomm, and Texas Instruments, and the Thread Group now has over 200 members with new products from Yale, Schneider, and Samsung in the pipeline. But the IoT space remains crowded and confusing.

OCF's IoTivity and the Allseen Alliance's AllJoyn code will be included in new products this year. What's more, in a bid to avoid being steamrolled by Google and Thread, the two groups are discussing how to work together even potentially unifying their approaches.

Then there is Apple's closed system - HomeKit - which it is still struggling to pick up traction following a decision by the tech giant to insist on its own chips being included in all smart-home products.

Adding to the list: Samsung’s SmartThings - which has the benefit of being closely tied in with the company's specialized IoT Artik chips and now cloud platform; LG’s SmartThinQ; and the new, unexpected entry into the market - Amazon's Alexa/Echo. which has quickly built up its own eco-system thanks to its voice-operated rather than smartphone approach.

Then there are the standards: Nest's Weave and Google's Brillo (confusingly, although Nest is a part of Google it is not planning to use Brillo in its products). There is also ZigBee, which will work with Thread, and Z-Wave, which won't. And of course Bluetooth LE.

How did we get here?

Why such a huge range of conflicting standards and protocols? Several reasons.

For one, with everyone flagging up the internet of things as the next big market, companies are not keen on being tied into others' approaches, especially if there is no clear market leader.

Despite several years of hype, there are still relatively few smart-home products being used in the real world and so the market is wide open.

In addition, the standards that have been around for a while, such as ZigBee and Z-Wave have some disadvantages.

The IoT market is somewhat unique in that smart-home products need to be able to constantly communicate with one another over short distances but using very little power and without causing interference. Before the explosion in Wi-Fi, this was typically done using mesh networking and a hub.

But people soon realized that the real value of IoT comes in people being able to introduce a whole range of different products from different manufacturers and have them communicate with one another.

No one wants to open up their closet and see 15 different hubs from 15 different companies, all plugged into the mains and all desperately trying to communicate with their associated components dotted around the house. And so the need for a common language is inherent to the market's future success. And, of course, everyone wants to be the owner of that common language.

ZigBee and Z-Wave and Insteon were not designed with modern IP networks in mind and IP addressing is increasingly accepted as the best way to build out an IoT global infrastructure.

Bluetooth is a more modern standard and one that is in a huge number of mobile devices already - but it is power-hungry and so people are working furiously on a low-energy version of it. Wi-Fi is standard for so many things these days but it is also power hungry and would require every IoT product to be plugged into a power socket or carry a fat battery. All of that opened the doors for optimized solutions. And in they have come.

Where is the market going?

One big battle playing out is between Z-Wave and everything else.

Z-Wave is the most common standard in use if you consider existing products. It has a huge number of backers and it works well. The problem is that it is not an open protocol and a company called Sigma Designs owns the intellectual property and it manufacturers the chips and licenses the right to use it.

ZigBee is a little more open but can't do everything that IoT products need to do. As a result, new standards and protocols are increasingly interoperating with ZigBee but shunning Z-Wave. The two biggest cases in point: Google's Thread and Samsung's Artik.

How Sigma Designs responds to that threat will be the first critical battle in the war over IoT.

Second comes the overall eco-system. Apple thinks it can use its installed base of products to offer a better and more secure eco-system for consumers: a seamless iPhone-driven HomeKit experience.

And it may: Apple is renowned for great design and smooth working by controlling both the hardware and software. But its decision to insist that manufacturers include an Apple chip in all their products have made other companies wary. At the moment, HomeKit really exists in the fevered imagination of Apple execs and other companies are not keen on conceding the fight to Apple before it's even begun.

The second big battle is likely to be between Samsung and Google. Samsung has gone all in on IoT. It has its SmartThings arm, its Artik chips and now its Artik cloud platform. It is still a member of the Thread Group but it sees an opportunity to steal a march on the market and potentially build an IoT empire while others dither.

Google, meanwhile, has the sexy Nest and its brand name and a lot of engineering talent. Nest's image has taken a bit of a battering recently, especially when it decided to simply kill off the Revolv hub, but it is still the smart-home poster child. And Google has shown time and again it can out organize and out engineer even the biggest, most established players.

And in the end

And then the third big fight is the market itself. And the market comprises two complimentary and inter-dependent parts: manufacturers and consumers.

Manufacturers simply cannot include all the different standards and approaches in their products: it is too complicated and too expensive. So they have to make bets on who they think will win out.

At the same time, consumers will make purchasing decisions based on two key factors: how good the product is, and how useful it is.

If enough manufacturers end up going one direction, it will likely lead the market and drag consumers with them. But if a star product hits the market - like Amazon's Echo - that is a big hit with consumers, then it could pull manufacturers over to whatever standards that product uses.

Everything is to play for. In that respect, Google's decision to open source Thread has come at the right time.

Google is not a closed eco-system kind of company and so open sourcing Thread makes perfect sense. The fact it has taken this long is probably a sign that after Nest's recent problems, Google decided to pay it closer attention. And in doing so, it asserted its open source philosophy. ®